Bronchiectasis in childhood is still one of the most common causes of childhood morbidity in developing countries. Diagnosis and management of these patients remain problematic. Bronchiectasis can be focal or diffuse. When occurs locally, often present with recurrent cough and infectious exacerbations. When diffuse, the patients often have additional signs and symptoms of generalized airway obstruction, reduced lung function and may ultimately progress to respiratory failure. Bronchiectasis develops as a result of acute or chronic infection or inflammation; which may also be associated with an underlying anatomic airway obstruction, a congenital disease. Here we report two cases having unusual presentations whichhad led to diagnostic dilemma.

Bronchiectasis is a disease characterized by irreversible, abnormal dilatation and anatomic distortion of the bronchial tree, likely represents a common end stage of a number of nonspecific and unrelated antecedent events. Its incidence has been decreasing overall in developed countries, but it persists as a problem in developing countries.

It can be categorized according to the pathological or radiographic appearance of airways. 1, 2. It is an uncommon disease with a potential to cause devastating illness, including repeated respiratory infections requiring repeated antibiotics, disabling productive cough, shortness of breath, and occasional hemoptysis3, 4.Accurate estimates of the incidence of bronchiectasis are not available. Typically, diagnostic studies are pursued only in those with persistent symptoms and sings, both clinical and radiological (5). Clark et al. found the incidence of bronchiectatic changes to be 1.06 per 10,000 children living in Scotland6. Bronchiectasis is still common in developing countries and among the lower socioeconomic class. Recurrent respiratory infections under treatment with antibiotics and poor immunization rates are the main causes of the relatively high prevalence of disease in these populations7. Other researchers in 2000 reported a high prevalence in relatively isolated populations with poor access to health care and high rates of respiratory tract infections during childhood8. Bronchiectasis can be localized or diffuse and primary or secondary to other systemic diseases. The etiology of bronchiectasis is varied. Infections, congenital and genetic disorders, ciliary abnormalities, immunodeficiencies and foreign body are the most common causes of bronchiectasis in childhood. In countries with high incidence of tuberculosis, the pulmonary TB happens to be one of the most important causes of bronchiectasis in children.9

A 13 year old girl presented with complaints of intermittent fever with evening rise of temperature and cough with yellowish expectoration, seldom with post-tussive vomiting for last three months. Had lost weightabout 1 Kg in past two months and had one episode of hemoptysis 15 days back. No history of Koch’s contact. She had received BCG vaccine at birth.On examination child was afebrile, PR 122/min, RR 58/min, BP 110/80 mmHg. Pallor was present, No clubbing or lymphadenopathy. On respiratory system examination there was mild subcostal retraction, diminished chest movement on left side and dullness on percussion of left lower zone. On auscultation, there was reduced air entry in left lower zone, occasional rhonchi, bronchial breathing and increased vocal resonance over left upper zone. Other systemic examination was normal.

On investigations his Hb was 9.8 gm/dL, TLC 14,600/cumm (Neutrophils-78%), ESR 70. Chest x-ray (fig.1) was suggestive ofhomogenous opacity left lung with loss of volume (Collapse),Trachea and mediastinum weregrossly shifted to left side, air-bronchogram was present on left side. Right lower and mid-zone showed hazy interstitial shadows. Medial border of rightlung had crossed to opposite side. left dome of diaphragm, CP angle, heart borders were not clearly defined. Mantoux test was 20mm after 72 hours. Sputum was negative for AFB, CBNAAT(Cartridge based nucleic acid amplification test) of sputum was negative and family screening for tuberculosis was negative.

On admission child was started on injectable amoxicillin-clavulinic acid and oxygen therapy. Fibreoptic Bronchoscopy was done to rule out any bronchial malformation or foreign body but it was reported as normal study. Broncho-alveolar lavage cytology revealed a TLC of 2500/dL (N-80%) and some degenerated mononuclear cells. Child was put on AKT Cat-I in view of her symptoms, ESR 70, Mantoux test strongly positive, collapse/ consolidation on X-ray. Patient was discharged on AKT and oral amoxiclav as her symptoms improved, fever subsided. Respiratory ratehad come down to normal and there was no distress. She was called for follow up after 1 week.By then BAL had grown acinetobacter (Sensitive to levofloxacin). Hence the child was put on Levofloxacin for 21 days. However anti-TB regimen was also continued.

CBNAAT and BAL culture did not grow Mycobacterium TB even after 3 weeks. She came back to OPD after 5 weeks with worsening of cough and wheezing. Chest examination showed no significant change after 5 weeks. Repeat Chest XRay also did not show any significant change. Patient was nebulized with bronchodilators at ED and HRCT chest(fig.2) was done on instance. It revealed lung hypoplasia on the left side, with shifting of mediastinum towards the left. The left main bronchus was not visualized. Cystic bronchiectatic cavities of various sizes were seen bilaterally.Right lung showed areas of mosaic attenuation in upper, anterior and posterior segments of middle lobe. Prominent was fibrotic changes in right lower lobe. There was no pleural effusion or lymphadenopathy.

An 11 year old female child came to the OPD with complaints of fever since 8 days, loose stools and vomiting since 2 days. Child had a history of cough with expectoration since 5 years of age. At time, she was admitted for the complaints of cough for 3 weeks and intermittent fever. She was diagnosed to have pulmonary tuberculosis on the basis of chest X-Ray (Consolidation in right paracardiac region). With positivehistory of contact with father (Who was earlier diagnosed as pulmonary tuberculosis around 10 years back but was incompletely treated). Child was also noncomplaint with her AKT started at that time, but stopped after 3 months. She was immunized till 5 years of age. Child was also admitted at 7 years of age for similar complaints and similar x-ray picture. Each time, shewas treated with antibiotics, symptomatic remedies and was discharged.

On examination child was afebrile, PR 162/min, RR 44/min, BP 80/50 mmHg spo2-89% on room air, 98% on oxygen. Signs of severe dehydration were present. Child had Pallor, grade 1 clubbing and no lymphadenopathy. On respiratory system examination there was respiratory distress, diminished chest movement on left side, dullness on percussion on left side and right sided lower lobe, on auscultation there was reduced air entry on left side, bilateral crepitation & bronchial breathing.

On investigations her Hb was 11.4 gm/dL, TLC 20,920/cumm (Neutrophils-82%), ESR 70. Chest x-ray (fig 3) was suggestive ofinfiltrative diffuse patch on right mid zone with air bronchogram present, haziness bilateral upper zone, trachea &mediastinum were normal. This xray picture was similar to that of past 2 x-rays. Mantoux test was negative after 72 hours. Sputum was negative for AFB, CBNAAT (cartridge based nucleic acid amplification test) of sputum was negative & family screening for tuberculosis was negative.

These cases show the varied ways of presentations of bronchiectasis in children.Bronchiectasis continues to be a clinically significant disease in the developing countries in spite of the advent of antibiotic therapy. Advances in radiologic imaging with HRCT, improved the recognition of early disease and can be useful in evaluating the type, the extent and the distribution of bronchiectasis. Cylindrical bronchiectasis is the mild form of the disease, varicose bronchiectasis being more severe type and cystic form is the most severe type. The vicious cycle of chronic infection and damage to the airways leads to increasingly severe symptoms, physiological impairment manifesting as ventilatory defects, abnormalities in gas exchange and hemodynamic consequences of development of pulmonary hypertension, RV dysfunction and corpulmonale.( 4,7)

Pulmonary hypoplasia is a developmental anomaly, characterized by underdevelopment of lower respiratory tract. Thoracic congenital malformations may go unnoticed sometimes until late childhood or adulthood as they may remain asymptomatic in early life as it is detected late even in our first case.

As reported in our case series a child with bronchiectasis can have a wide variety of presentation like chronic cough with or without expectoration & occasional haemoptysis, intermittent fever, breathlessness, weight loss and intermittent worsening of symptoms because of recurrent infections. These children are commonly misdiagnosed as pulmonary tuberculosis in early stages in our country. So whenever a child presents with variable findings on chest auscultation like wheezing, crepetations & bronchial breathing one should always consider a possibility of bronchiectasis. There is a strong association between bronchiectasis and repeated episodes of pneumonia in such children. Thus this study helps us to have an open outlook while we diagnose a child who comes with similar complaints. 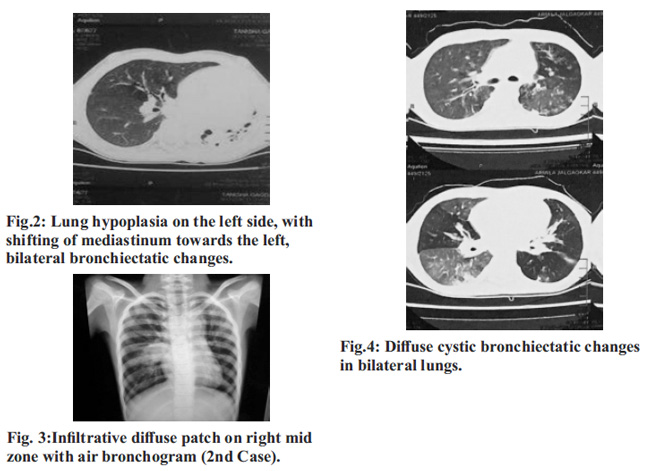