Mehodology: A hospital-based study was conducted among 173 children selected by complete enumeration method with a mean age of 4.81±2.48 years. Chi-square test and binary logistic regression method was used to find significance of association between different variables and chemical pneumonitis.

Result: 38.15 of the study population developed chemical pneumonitis. Majority of them were from to rural area (68.2%),ingested more than 30 ml of hydrocarbon (80.3%), hospitalized more than 2 hours after ingestion (69.7%), not treated with hydrocortisone (75.8% & 71.2%, respectively) and developed fever within 1st 2days after ingestion(84.8%).Our model predicted 96% of dependent variable correctly.

Methodology: This hospital-based study was conducted in the pediatric emergency ward of Burdwan Medical College, Burdwan from May 2016 to October 2016. All children who were admitted for liquid hydrocarbon ingestion were included, following complete enumeration method. Total 179 children were admitted for hydrocarbon ingestion, but six were excluded from the study (3 for not giving consent, 2 were discharged on risk bond and 1 patient had congenital heart disease from which he died). Hence, a total of 173 children were studied. Data were collected by reviewing hospital record as well as clinical examination of admitted patients. Single stethoscope is used throughout the study for quality control. X-ray plates of each patient who developed chemical pneumonitis was reviewed twice by two different radiologists.

Operational Definition: Chemical pneumonitis cases were defined as who developed tachypnea, fever or have distinct radiological abnormality in form of unilateral or bilateral consolidation and/or pneumatocele formation.7

Result: Mean age of the study population (n=173) was 4.81±2.48 yrs. Females are 52.6%, rest are male (43.4%). 58.9% of them are from rural population & maximum (54.9%) of them belong to middle class according to modified BG Prasad Scale8.Kerosene was the most frequently (89.0%) ingested substance, followed by terpene and others(diesel, petrol, glycerol etc).38.1% of study population developed chemical pneumonitis subsequently. Most commonly affected lobes are both lower lobes (38.1%), followed by left upper lobe (22.6%).

There is statistically significant positive correlation of chemical pneumonitis with amount of hydrocarbon ingestion (0.780), time between ingestion and hospitalization (0.686) and presence of fever (0.646). Whereas, correlation of chemical pneumonitis with use of nebulization and hydrocortisone (-0.557 & -0.654) respectively is statistically significant but negative, i.e. they are protective. Though urban residence seems to be p r o tectiv e in d ev elo p men t o f ch emical pneumonitis, correlation is insignificant statistically (Table 2). Chemical pneumonitis is 31.8 times more likely to develop in children who ingested higher amount of hydrocarbon. It also more likely develops among children who were hospitalized in late (Adjusted odds ratio: 9.4) & who developed fever in 1st two days after ingestion (Adjusted odds ratio: 15.5). On the other hand, nebulisation with salbutamol/levosalbutamol found to be protective , having an adjusted odds ratio of 0.07. Use of hydrocortisone, though significantly correlated with development of chemical pneumonitis among the patients, become insignifacnt in the binary logistic regression model. (Table 3) Amount of ingestion, time between ingestion & hospitalization, use of nebulisation & presence of fever in 1st 2days- these four variable can explain 66.7% to 90.7% variance of development of chemical pneumonitis among the study subjects. Overall, our model can correctly predict 96% of the outcome variable.

The main limitation of this study is small sample size. But it may help to develop appropriate treatment protocol for liquid hydrocarbon ingestion.

Preventive measures should be taken in form of child-resistant packaging15, legal measures16 and proper education17,18 of the parents for prevention of ingestion of liquid hydrocarbon, so that this grave problem is eliminated at the root.

Conflict of Interest: None
Source of Funding: Self.

11. Konca C, Tekin M, Turgut M. The Combined Use of Inhaled and IntravenousSteroids for Children With Chemical Pneumonitis After Ingestion of Paint Thinner.Iran Red Crescent Med J. 2016 May 15;18(7):e24300 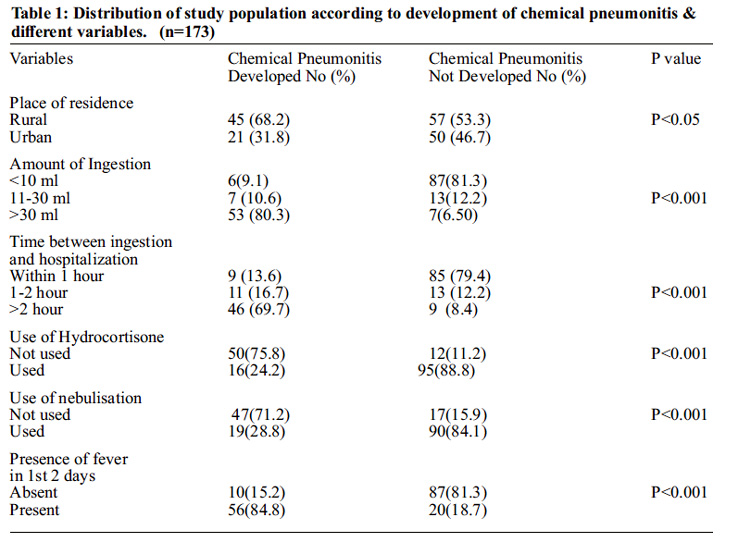 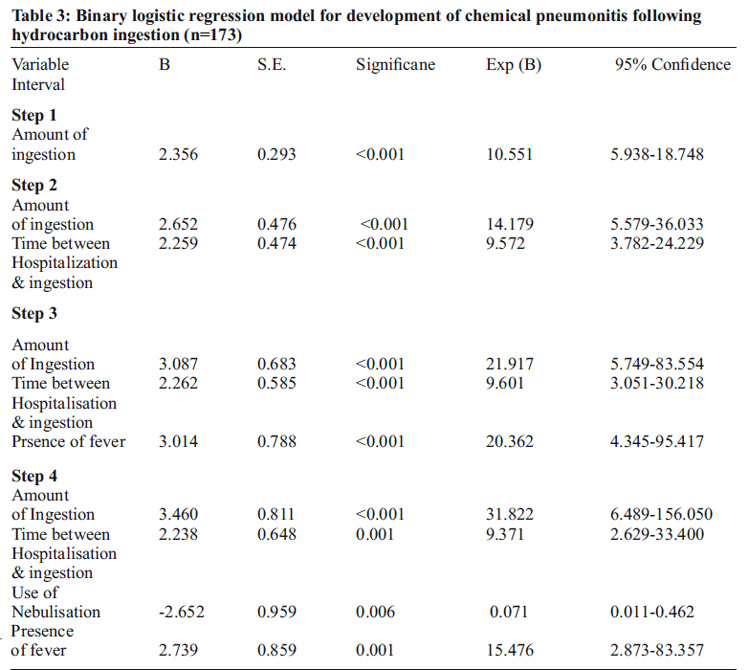