Maternal body dimensions are first determinants of neonate biometrics; predominantly their birth weight and length, which are closely related to perinatal morbidity and mortality(1), it was known that mother’s nutritional status is also known to be a key indicator of infant’s body dimensions and its early growth features. Birth weight and length are clearly related to mother’s nutritional (2) and anthropometric factors(3)

Objective: To find out which maternal anthropometric parameter is the best indicator for birth outcome.

Subject: All booked cases of antenatal mothers in first trimester and their newborn babies delivered at the Hi-Tech Medical College and Hospital during November 2014 to October 2016 were taken as the study population.

Conclusion: Maternal weight, BMI and MUAC have strong positive association with birth weight of newborns. Interventions during pregnancy should be taken to improve nutritional status of the mother by which it is possible to improve the birth weight of newborn BMI having closest relationship with birth-weight which tends to be inversely proportional to height and directly proportional to weight. Out of the four parameters examined height didn’t seems to have any relation with weight.BMI of the mother is the best indicator of the weight of the newborn. As per the reports short height speaks of the obstetrics outcome. Therefore high BMI and low height can be predictive of a cephalopelvic disproportion, which has a direct bearing in the mode of delivery.To save the newborn from distress and reduce neonatal mortality and improve quality of life which could have been the result of hypoxic ischemic encephalopathy, early assisted delivery can be planned in vulnerable segment.

Maternal body frame is the first determinants of neonatal biometrics; predominantly their birth weight and length, which are closely related to perinatal morbidity and mortality (1). Itis also known that mother’s nutritional status is a key indicator of infant’s and its early growth features. Birth weight and length are clearly related to mother’s nutritional(2) and anthropometric factors(3) respectively. The anthropometric measurements that are commonly used as indices of growth and development are height, weight and mid-arm circumference (4). The growth of neonates were reported to be influenced by some maternal variables such as age, parity, social class and ethnicity(5). It was reported that maternal anthropometry is a potentially valuable tool in the evaluation of pregnancy status and prediction of birth weight(6). Several maternal factors such as age, body height, pre-gestational body weight, gestational weight gain, parity, gestational age, smoking during pregnancy, ethnicity, general health status, and dietary habits during pregnancy may influence the foetal growth which manifests in birth length and birth weight(7).

Undernourishment in the womb increases the risk of death in the early part of child’s life. Those who survive tend to have impaired immune function and increased risk of disease.They are likely to remain undernourished, with reduced muscle strength, cognitive abilities and IQ throughout their lives. As adults, they suffer a higher incidence of diabetes and heart disease.(8)Low birth weight (LBW) is defined as a weight at birth of less than 2500 grams irrespective of the gestational age.(9) In 2013, nearly 22 million newborns, an estimated 16 per cent of all babies born globally, had low birth weight. Since, nearly half of the world’s infants are not weighed at birth, accurate monitoring is challenging.(10)

Reduction by at least one-third in the incidence of low birth weight is one of the seven major goals of the “A WORLD FIT FOR CHILDREN” programme of the United Nations. (11) Monitoring improvement in low birth weight is thus being given high priority by the UN , as well as by national governments and the international communities.(12)

2014, South Asia had the highest incidence of low birth weight, with one in four newborns weighing less than 2,500 grams. 66% of the South Asian babies were not weighed at birth. Although data on low birth weight are adjusted to account for underreporting, they are still likely to underestimate the true magnitude of the problem in the region.(13)

Low birth weight babies include both preterm and term small for date babies. Their clinical problems and prognoses are quite different from each other. High incidence of LBW babies in our country is accounted for by a higher number of babies with intra uterine growth retardation (smallfor- date) rather than the preterms.(15)

96 per cent of low birth weight occurs in the developing world, reflecting the higher likelihood of these babies being born in poor socio-economic conditions, where womenare more susceptible to poor diet and infection and more likely to undertake physically demanding work during pregnancy(16). It reflects, further, a generational cycle of undernutrition, the consequences of which are passed along to children by mothers who are themselves in poor health or undernourished.(17)

Over 80% of all neonatal deaths, in both developing and developed countries, occur among the LBW babies. Low birth weight is also a major negative determinant of success and duration of breast feeding, which is a well known protective asset against infant deaths in the developing world. It is estimated that in a developing country, LBW infants have 2.3 times increased risk of mortality due to infections compared to normal birth weight babies after controlling for all the confounding variables. The neurodevelopmental sequelae of birth asphyxia are found to be three times more common in LBW babies compared to their normal weight counterparts. Small-for-date babies remain stunted throughout life leading to impaired work capacity.(18)

Previous studies reported causes of LBW which include hard manual labour, maternal nutrition, economic condition, maternal height, maternal weight and most importantly, mother’s age and parity19,20,21,22,23,24,25. The usefulness of MUAC for screening women at risk of poor pregnancy outcome is promising both on theoretical grounds (It reflects maternal fat and /or lean tissue stores).Relationship between MUAC and weight26’29 is independent of gestational age(27,28). Maternal anthropometric measurements provide a simple, cheap and available means of predicting birth weight with a variable degree of reliability.

Birth weight is the most sensitive and reliable indicator of the health in a community. It is universally acknowledged that size at birth is an important indicator of foetal and neonatal health in the context of both individual and community. Birth weight in particular is strongly associated with neonatal and post-neonatal mortality and with infant and child morbidity(30). Hence the study was planned to have a re-look at it.

Type Of Study: Observational prospective study.
Study design: All booked cases of antenatal mothers in first trimester and their newborn babies delivered at the Hi-Tech Medical College and Hospital during one year period were studied. Pregnant women whose expected delivery date was up to August 2016 and accorded informed consent were included.

Inclusion criteria: All women who received prenatal care and delivered in Hi-Tech medical college and hospital were included in the study. 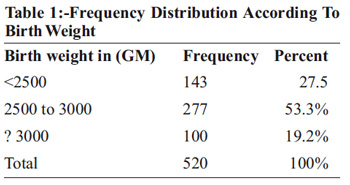 Anthropometric Characteristic of 520 expectant mothers: Their Anthropometric Measurement sincluded height, weight, BMI, MUAC as shown in the table below (Table 2). 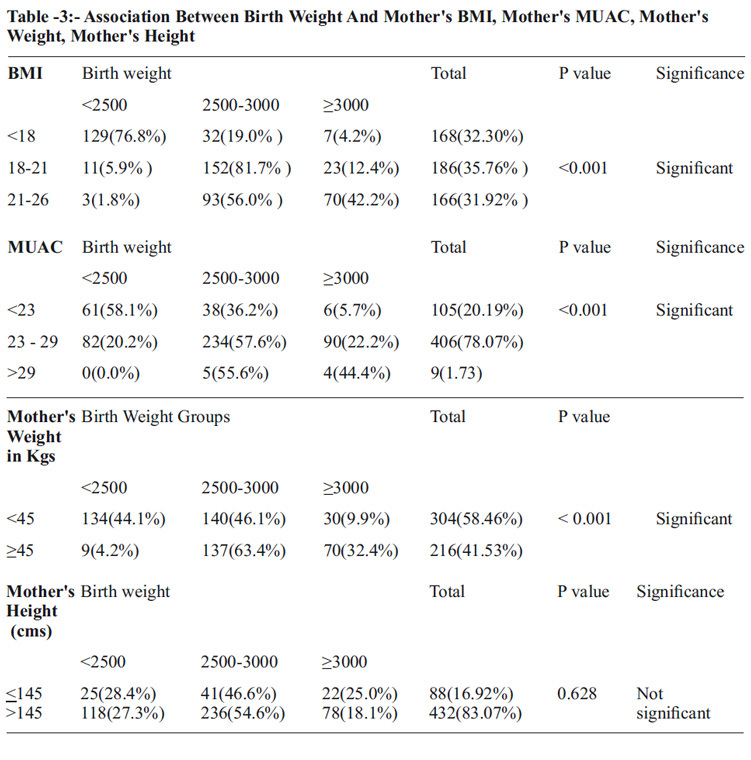 Non-parametric receiver operative characteristic (ROC) curve analysis was done, and ROC curves were used to evaluate the accuracy of various anthropometric measurements, indicated by the area under the curve (AUC).

The AUC was found to be maximum with BMI followed by weight and MUAC, clearly depicts their relative accuracies as a marker of low birth weight

It was observed thatoccurrence of low birth weight was higher(76.8%) in mothers having BMI <18 and only 7.7% LBW babies were seen in mothers having BMI 18-26 . This association was found to be statistically significant. The finding is similar with Kramer (31) who found that mothers who were underweight with BMI <18 kg/m2 had significantly higher incidence of having low birth weight babies and concluded that maternal nutritional factors both before and during pregnancy account for >50% of cases of LBW in developing countries. Han Z et al(32) found that pregnant women with BMI ?23 kg/m2 (<20 kg/m2 in most studies) had increased risk of having LBW infant (RR 1.52, 95%CI: 1.25-1.85) in developing countries.

Birthh LBWbabies was higher in mothers having weight <45kg. Normal (>2500 Grams) baby were born to mothers having weight ? 45kg.This association is found to be statistically significant. This is in agreement with study of Fairley et al.(34)Shamsum et al(35) documented that maternal anthropometric parameters such as weight, height, body mass index (BMI), weight gain during pregnancy, nutritional status and socioeconomic status, are some well-established determinants of birth weight of the neonate.Nahar S, et al(36)conducted astudy to determine whether maternal anthropometry can predict birth weight, and if so, to identify which cut-off values provided the best prediction of low birth weightin a field situations. In this Community-based longitudinal study, a total of 1104 normotensive, non-smoking pregnant women who attended community nutrition centers were studied from first presentation at the center until delivery of their child. The frequency of LBW(<2500g) was 17%. Polynomial regression analysis showed that the best predictors of birth weight (Based on adjusted R2 values) were in general, weight at registration with adjusted R2 ranging from 2.5% to nearly20%.Weight at registration continued to be the best predictors of LBW. Sensitivity and specificity curves were drawn for each registration month, body mass index and different weight gain groups, using different weight and height combinations. The results showed that for registration month 3-5, a combination of weight (<45 kg) and height (<150cm) gave the highest sensitivity (50%).

Based on the results of this study and other studies reported in this literature, it can be concluded that anthropometry, BMI, weight and MUAC have strong positive association with birth weight of newborns.

Use of anthropometry to assess maternal malnutrition can be useful in reducing incidence of LBW.

Therefore, interventions during pregnancy should be taken to improve nutritional status of the mother.

Though an inverse relationship could not be established, yet unit height without body mass did not reflect in fetal growth in utero.

High BMI and low height can be predictive of a cephalopelvic disproportion, which has a direct bearing in the mode of delivery.

To save the newborn from birth asphyxia, other stress and to reduce neonatal mortality aas well as to improve quality of life, ahigh risk group within the expectant mothers can be identified with height and BMI. They can be followed of in the field setting intensively and providedadequate facilities, early referral and timely intervention.

Ethical approval: The study was approved by the Institutional Ethics Committee.

13. United Nations Children’s Fund Global Databases, 2014, Based On Multiple Indicator Cluster Surveys(MICS), Demographic and Health Surveys (DHS) and Other Representative Surveys, 2009-2015 ( For % Not Weighted In 2008-2012) With Exception Of India And Indonesia.

17. United Nations Children’s Fund: Progress For Children : A Report Card On Nutrition; No.4, May 2006 (www.unicef.org/progress for children/2006n4/index_LBW.html)

26. Krasovec, K . An investigation into the use of maternal arm circumference for nutritional monitoring of pregnant women. Baltimore, 1889.p119-31.

34. Fairley, L. (2000). Changing patterns of inequality in birth weight and its determinants: A population-based study, Scotland. Paediatric Perinatology and Epidemiology, 19: 342-51