Objective: Respiratory infections in children are associated with significant economic burden,as well as significant morbidity and mortality. Immunomodulation with pidotimod, a synthetic dipeptide, has been shown to reduce incidence of recurrent respiratory infections (RRIs) in children. This study was conductedto assess efficacy and safety of pidotimod in Indian children with RRIs.

Materials and Methods: In an OPD based study, children aged 2 to 10 years were randomized to pidotimod or control group in a 2:1ratio. Patients included had RRIs defined as six or more acute respiratory infection episodes in one year. Pidotimod was administered in dose of 400 mg as 7 ml of oral suspension twice daily for 15 days followed by once daily to complete 2 months. Treatments were started on day 1 of infection in addition to standard treatments. Patients were followed for 6 months after completion of treatment. Incidence of respiratory infection episodes were compared to previous rate in either treatment groups as well as between the groups.

Conclusion: Pidotimod is effective and safe addition to lower the recurrence of respiratory infections in children including those having asthma and may be recommended in Indian children with RRIs.

Amongst various infections, acute respiratory infections (ARIs) are common in children especially below 5 years and are major cause of morbidity and mortality. Worldwide, South-East Asia has highest prevalence of ARIs. Incidence of ARIs in India is widespread. A study from North India reported ARI incidence of 5.88 per child-year in children below 10 years of age. A South Indian study, reported ARI prevalence of 59.1% (63.7% urban and 53.7% rural). These ARIs tend to be recurrent in children leading to frequent hospital/out-patient visits. Occurrence of six or more ARIs in a year is recognized internationally as recurrent respiratory infections (RRI). Among various predisposing factors, immune immaturity may be an important contributor to recurrence of ARIs in young children. It has been reported that abnormalities of neutrophils and macrophage activity as well as dendritic cells, natural killer (NK) cells, B-cells and T-cells are associated with RRIs.

Preventive measures like vaccination, hand washing, avoidance of pollutants, and reducing indoor air pollution by avoiding use of solid biomass fuel can contain recurrence in ARIs. However, accomplishing these measures in every household may be lacking. Recurrence of these infections puts additional socio-economic burden to the family and the community. More so, RRIs cause exacerbations in children with airway allergies like asthma. Besides standard therapy and preventive measures, immunomodulation with synthetic dipeptide – pidotimod – has been found effective in RRIs. Pidotimod exerts its immunomo dulatory effect by different mechanisms involving adaptive and innate immune responses which include dendritic cell maturation, upregulation of HLA-DR and cytokines like γ-interferon to induce T-cell proliferation, increase in activity of NK cells, promotion of phagocytosis, modulation of airway epithelial cells with upregulation of toll-like receptor-2 (TLR-2) and others. Pidotimod has been found effective, safe and well tolerated in children suffering from RRIs with or without asthma. There is so far no evidence with use of pidotimod in children with RRIs in India. This article represents the first evidence on pidotimod in paediatric RRI from India along with a brief review of its pharmacology and clinical evidence.

A total of 63 children aged 2-10 years with history of RRI (defined as 6 or more RRIs in preceding year) were divided into treatment and control group in a 2:1 randomization. Children suffering from asthma were also included in both groups. The study was done in the city of Delhi in the months Aug-Jan. Children with diagnosed primary immune deficiency disorders or acquired immunodeficiency states, known systemic disease involving heart, liver, gastrointestinal tract and/or kidneys, receiving potential agents known to interfere with immune response and recent immunization within 3 months before randomization were excluded. Study was conducted with ethical principles according to Declaration of Helsinki

Pidotimod in a dose of 400 mg was administered as 7 ml of oral suspension twice daily for 15 days followed by once daily to complete 2 months, to the treatment group. Treatment was started on day 1 of current illness as add-on to standard treatment of respiratory infections. Treatment of asthma was continued in those who had asthma at the time of randomization.

Reduction in recurrence of respiratory infections in 6-month post-treatment period and comparison to pre-treatment frequency was the main outcome assessed in this study. Secondary outcome was safety assessment.

Compared to placebo, mean number of RTI episodes were significantly reduced in pidotimod group in a 6-months follow-up period which was evident from first month (p=0.003). At 3rd month of follow-up, there were no further RTI episodes in pidotimod group and the difference compared to placebo was significant as shown in table 2. Total number of RTI episodes were significantly lower with pidotimod than in controls (0.09±0.29 Vs 2.90±0.64, p=0.001). Similar results were evident in patients who had asthma as shown in table 2. When compared to pre-treatment frequency of RTIs, mean difference after treatment with pidotimod versus controls was significant in overall population (mean difference -7.31±0.96Vs- 4.48±1.09 respectively, p=0.001) and asthmatic patients (mean difference -7.31±0.96Vs-4.48±1.09 respectively, p=0.001) as shown in table 3. Reduction in mean number of RTIs at 6 months was 98.8% with pidotimod and 60.7% in control group in overall population whereas it was 99.3% and 54.7% respectively in asthmatic patients. Figure 3 shows the pre-treatment and post-treatment mean number of RTIs.

There were no side effects reported in any of the patients in either pidotimod or control group. Both treatments were well tolerated.

Pidotimod is a synthetic orally active dipeptide and is chemically designated as 3-Lpyroglutamyl- L-thiaziolidine-4carboxylic acid. It has immunomodulatory properties. It affects both adaptive as well as innate immunity. Pidotimod is known to induce dendritic cell maturation with release of different cytokines which help in differentiation of T -cell to Th1 phenotype, increase in functional capacity of natural killer cells and promotion of phagocytosis. Further, it enhances defensive functions of airway epithelial cells by upregulation of TLR-2 receptors and increase in secretary IgA secretion.

Pharmacokinetically, oral administration of pidotimod follows first-order kinetics. Rapid absorption occurs after oral intake with bioavailability of 42-44%. Its apparent volume of distribution (aVd) is 30 L and is not associated with accumulation or auto-induction phenomenon. Unchanged elimination occurs via urine. Plasma half-life is nearly four hours. Different oral formulations of pidotimod like tablets sachets, and vials are reported to be bioequivalent

In this study, we found that pidotimod significantly reduced the recurrence of RTIs compared to controls over 6-month period. Also, there was significant reduction in number of RTI episodes compared to mean number of annual RTI seen in preceding 1 year, with pidotimod compared to control. Similar results were evident in patients with asthma as well. The effectiveness of pidotimod was well supported by excellent safety and tolerability in children as there were no side effects reported by any patient compared to controls. A study from Licariet al., in 100 children with RRIs reported that compared to placebo, pidotimod (400 mg/d for 60 days) resulted in resolution of respiratory symptoms, reduction in medications requirements, increased school attendance and reduction in number of RRIs in significant number of children who had previous RRIs in 120 days follow-up period. Study reported no adverse effects with pidotimod. Similar results were reported in another study from Namazova- Baranovaet al., with significant reduction in ARIs in 6 months period. Pidotimod was reported to hasten the recovery in children with RRIs.Careddu P observed persistent effect of drug even after withdrawal with significant reduction in incidence of RRIs with pidotimod compared to placebo. These findings along with our results strengthen the evidence that pidotimod reduces incidence of recurrent respiratory infections and may have prolonged benefits even after discontinuation of therapy. Clinical efficacy of pidotimod have been established in various studies as summarized in table 4.–

Respiratory epithelium is the primary defence against any respiratory illness. The immune response from epithelial cells orchestrate to provide protection to airways and lungs. In asthma, airway epithelium is primarily involved which elicits inflammatory response to both infective and non-infective allergens and thereby results in hyperactivity of airways. We observed significantly better efficacy of pidotimod in reducing RRIs in asthmatic patients as well. Zhao- Li and Xiao-Hong in asthmatic children reported significant improvement in lung function and greater efficacy with pidotimod in addition to background montelukast therapy than montelukast alone. The protective effect of pidotimod in asthma is possibly due to reduction in levels of IL-4 and IgE and increase in interferon-γ. Thus, by reducing the recurrence of respiratory infections and improving lung function, pidotimod may be useful in reducing the recurrent asthma attacks incidence.

In our study, percentage reduction in mean number of RTI episodes in 6-months follow-up was greater with pidotimod in overall as well as in asthmatic populations. This proves its better efficacy in RRIs. A study from Burgioet al., in children with RRIs found that 34% and 56% of doctors rated excellent and good efficacy of pidotimod as against 5% and 7.5% with placebo respectively. Clinical condition was rated to be greatly improved (50%) and improved (50%) with pidotimod by parents of the children who participated whereas it was rated 5% and 30% for placebo respectively. Thus, pidotimod results in clinical improvements with reduction of RTIs which is well perceived and observed by physicians and parents.

No adverse events were found in any of the children who received pidotimod. This is consistent with other published reports as stated in table 4.

Pidotimod is effective and safe addition to the standard therapy for recurrent respiratory infections in children. Preventing recurrences of RTIs in children is crucial to reduce overall burden of respiratory infections. Efficacy in asthmatic patients as well, is a benefit that may reduce the recurrence of asthmatic attacks besides prevention of RRIs. This first observation in Indian setting provides background for further evaluation of pidotimod in a larger and long duration study to additionally confirm its efficacy and safety in RRIs.

Conflict Of Interests: None
Funding Source: None

8. Feng-Xin Z, Xin L: The effect of Pidotimod in the prevention and treatment of pediatric bronchial asthma, Chinese Journal of Biochemical Pharmaceutics, 2011, 32:3–8. 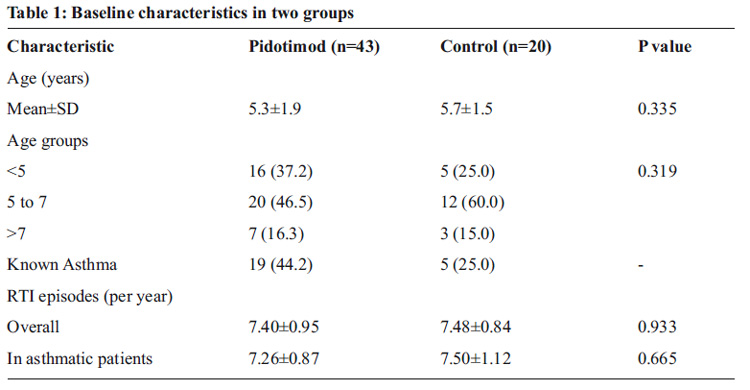 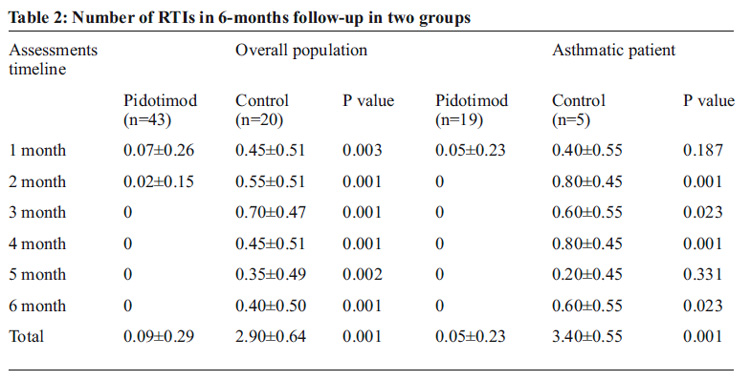 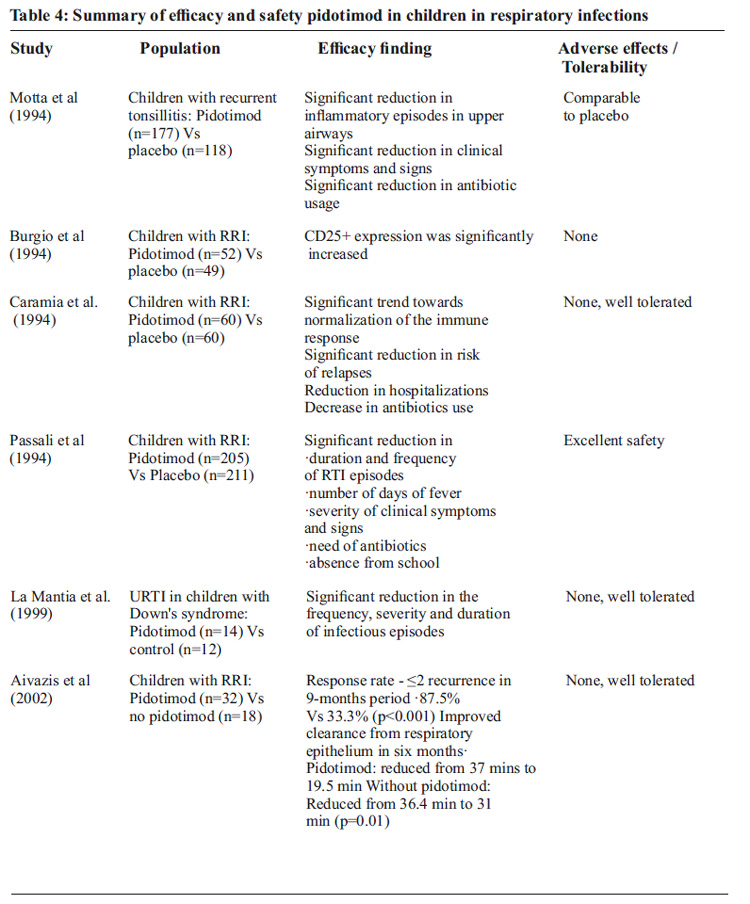 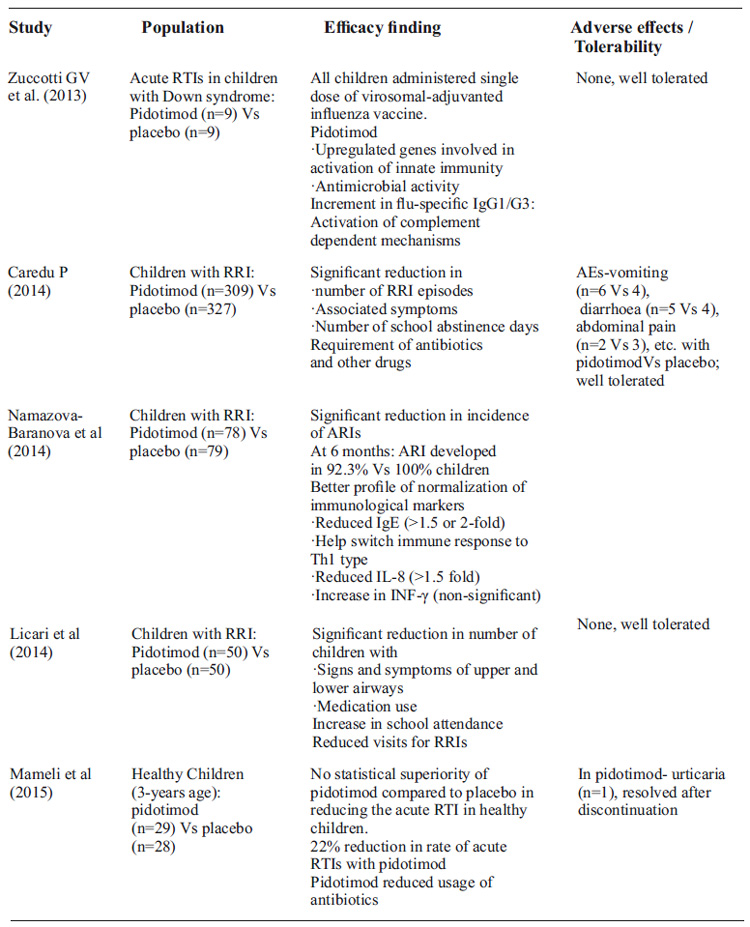 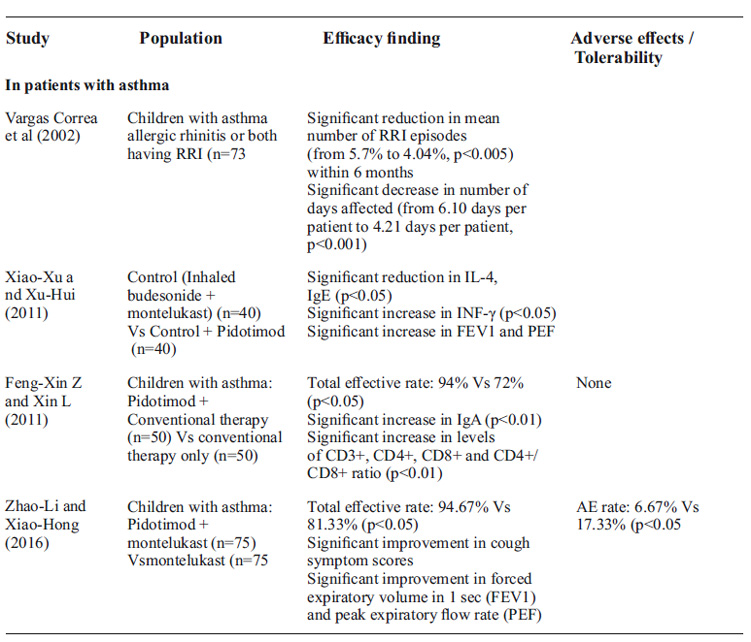