Introduction: Meningitis is a major cause of morbidity and mortality in infants and children below 5 years of age. Early detection and prompt therapy are the most important factors in prognosis of meningitis. LAT provides rapid microbiological diagnosis of acute bacterial meningitis earlier than culture so as to guide the clinicians for administration of appropriate antibiotics.

Material & Methods: A hospital based prospective observational and analytical. A total of 60 children were enrolled in our study on basis of inclusion criteria i.e. 1 month to 12 years of age and clinical history and examination suggestive of meningitis. Results: Predominance of patients were between 1 to 5 years of age in 50% with male predominance. Based on CSF picture, incidence of viral meningitis was seen in 38.3% patients, bacterial meningitis in 30% patients, and aseptic meningitis in 16.7% patients and TBM in 15% patients. Out of 18 ABM patients, sensitivity of CSF gram stain was 22.7%. Sensitivity of CSF Culture was 22.2%. In our study, 14 out of 18 patients had CSF LAT positive. Sensitivity of CSF LAT was 77.8%. Haemophilus influenzae was the most common organism positive in CSF LAT followed by Streptococcus pneumonia and Escherichia coli. Neurological deficit was seen in 41.9%, 55.5% and 11.1% cases of viral meningitis, TBM and ABM cases respectively. Overall case fatality rate in meningitis is 21.7%. Conclusion: Bacterial meningitis is the commonest cause of morbidity and mortality.Haemophilus influenza type b being the commonest organism.CSF LAT is a good sensitive test to detect bacterial meningitis early with sensitivity of 77.8%.

Meningitis is defined as an inflammation of the protective membranes that surround the brain and spinal column; in particular to arachnoid and pia mater.1 The severity of the disease depends on the cause. Among these, viral meningitis is the most common and bacterial meningitis is the most severe. It is the cause for significant morbidity and mortality worldwide.2 Meningitis is a medical emergency and continues to be a major public health problem in children. Two thirds of all deaths due to bacterial meningitis occurs in developing countries. Among survivors, the rate of subtle neurobehavioral disabilities at discharge is estimated to be as high as 50%.3Prognosis is largely determined by early diagnosis and prompt institution of specific therapy. Throughout history, many studies have persistently demonstrated that S. pneumoniae, H. influenzae and N. meningitides are responsible for more than 70% of cases.4 Gram stain of CSF can provide a rapid preliminary identification of infective organisms, but is liable to misinterpretation, particularly in inexperienced hands. Cerebrospinal fluid culture is the gold standard for diagnosis of bacterial meningitis.5 The CSF culture positively is reduced to <50% in patients with previous antimicrobial therapy.6 Production of clinically useful bacteriological report depends on the time it takes for the organism to grow under test and may result in a delay of 18 hours or longer in case of culture. Bacterial polysaccharide antigen of capsulated microorganism can be detected by newer immunological test called CSF Latex Particle Agglutination Test (LAT), as antigen may persist in the Cerebrospinal fluid even after lysis of bacteria. LAT is a diagnostic method that is used for the etiologic diagnosis of Bacterial Meningitis that provides results within 10 to 15 minutes.7 It is recommended when CSF Gram stain is negative, exclude bacterial meningitis.8 The current study was therefore conducted to find out the current clinical profile of meningitis in children and to evaluate the efficacy of CSF Latex Agglutination Test in bacterial meningitis.

It was a prospective, an observational and an analytical study. A sample size of 60 patients in age group of 1 month – 12 year age in IPD patients coming to Tertiary Care Hospital were enrolled in the study.

All children admitted with suggestive history and clinical findings suggestive of meningitis were enrolled for the study. Patients with partially treated meningitis and congenital malformations of spinal cord or brain were excluded. Details were entered on a pre-designed and pre-validated proforma. An informed consent was taken. Clinical and diagnostic evaluation was done in form of blood test, CSF routine and microscopy, culture and sensitivity tests. Neuroimaging was done wherever applicable. CSF was tested on Directigen Meningitis Combo (Latex Agglutination) Card Test. CSF LAT is based on the principle that when specific antibodies bound on the surface of latex beads, agglutination occurs and it is large enough to allow rapid visualization of positive agglutination. Specific soluble polysaccharide antigens accumulate in CSF as a result of infection by H.influenzaetype b, S. pneumoniae, and N. meningitidisgroups A, B, C, Y or W135 and Escherichia coli K1; and Group B Streptococcus.

50% patients were seen in 1 to 5 years of age, followed by 26.7% in less than one year, 23.3% in 6 to 12 years age group. Male predominance was seen with 58.30%. Most common presenting complaint was fever in 93.3%, followed by lethargy in 86.7%, refusal to feed in 81.7%, vomiting in 56.7%, and convulsions in 50%. History of BCG immunization was given by 73.3% children while Hib vaccination was reported by 18.3% children. None was immunized with other vaccines like Pneumococcal, Meningococcal or Japanese encephalitis. On general examination, hypertonia was seen in 45% of patients while hypotonia was seen in 5%. A total of 43.3% showed extensor plantar response while 56.70% had flexor response. Papilledema was seen in 18.30% of patients while chemosis was seen among 1.70%. Neck rigidity was seen in 70% and kernig’s sign present in 38.3%. Patients were grouped as Acute Bacterial Meningitis (ABM), Tubercular Meningitis (TBM) and Viral Meningitis on the basis of CSF protein, glucose, cells, and with neutrophilic or lymphocytic predominance. CSF protein and cells were increased in cases of ABM and TBM. CSF glucose was less than 50% of serum glucose in 42 suspected cases of meningitis (70%). Neutrophilic predominance was seen in 16 (88.8%) of ABM and lymphocytic predominance was seen in 8 cases (88.8%) of TBM. Of 33 viral meningoencephalitis, 13 cases (39.4%) showed no cells in CSF (labelled as aseptic meningitis). 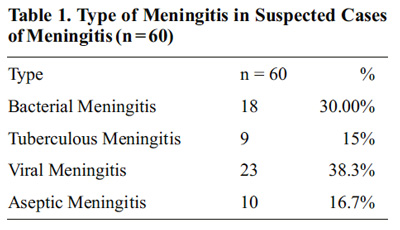 Out of 5 cases showing CSF Gram staining positive, 3 (5%) showed gram-positive and 2 (3.3%) gram-negative organisms. However in suspected cases of meningitis, none showed CSF ZN stain positive with a sensitivity of 27.7%. Of all 60 cases, CSF Culture was positive in 4 patients while 56 patients had no growth. 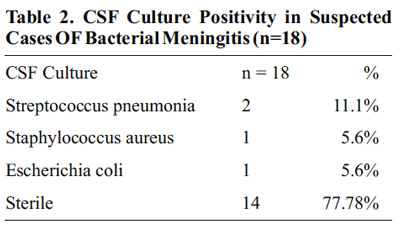 Of 60 cases, 18 had CSF picture suggestive of Bacterial meningitis. In these 18 cases, organisms were isolated in only 4 cases (22.2%) by gram stain. Streptococcus pneumoniae was isolated in 2 cases (3.30%). Staphylococcus aureus and Escherichia coli were isolated in 1 case each. CSF was sterile in the rest. However, 14 (77.8%) had CSF Latex agglutination test positive and 22% were negative. Senstivity of CSF LAT was found to be 78%. Haemophilusinfluenzae (8 cases) was the most common organism positive in CSF LAT, followed by Streptococcus pneumonia (5 cases) and Escherichia coli (1 case).

CSF LAT was positive in 10 suspected cases of ABM. Streptococcus pneumoniae was positive in 3 patients while 7 patients had Haemophilusinfluenzae positive on CSF LAT. Only one patient had CSF Gram stain positive, but organism couldn’t be recognized.

However 2 patients had no test positive i.e. neither CSF LAT nor Culture and Gram stain. Of9 patients suspected TBM, 2 patients (22.2%) showed both sputum and CSF Cartridge Based Nucleic Acid Amplification GENE Xpert (CBNAAT) as positive.2 patients (22.2%) had only sputum CB-NAAT positive. Remaining 2 patients (22.2%) had only positive CSF CB-NAAT. Sensitivity of CB-NAAT found to be 44.4%. Neuroimaging was done in 27 patients. Predominant findings are – basal exudates seen in 18.5% patients. While hydrocephalus and tuberculoma was seen in 11.1% cases each. Leptomeningeal enhancement and frontal region swelling was seen in 7.4% cases each and ventricular dilatation in 3.4% cases. Of total 60 cases, 45% had good outcome whereas 33.3% patients had neurological deficit. 21% patients expired. Neurological deficit was seen in 41.9%, 55.5% and 11.1% cases of viral meningitis, TBM and ABM cases respectively. Case fatality rate was 43.4%, 11.1% and 11.1% in suspected cases of viral meningitis, TBM and ABM respectively. Overall case fatality rate in meningitis was 21.7%.

Out 18 patients of ABM, CSF Culture, CSF LAT and CSF GM stain was positive in 2 patients. In these 2 patients, Streptococcus pneumoniae and Escherichia Coli was isolated.

In suspected eningitis cases, tests with shorter turnaround time, good sensitivity and specificity are important for early and accurate diagnosis. The latex particle agglutination test is highly sensitive and specific, simple to perform, no special equipment is required, technically easy, results are available in 10 minutes. Finally, there is no possibility for altering results due to prior antibiotic therapy6. In present study, out of the 60 cases of meningitis, prevalence of bacterial, tubercular, viral and aseptic meningitis was observed as 30%, 15%, 51.6% and 3.3% respectively. In comparable study by Farag et al., conducted in Egypt on 310 cases, found about 65.2% with bacterial meningitis (ABM) and 34.8% aseptic meningitis.9 Protein and cell counts in CSF were significantly raised in cases of pyogenic meningitis and TBM while they were lowest in cases of viral meningitis in present study. Our patients showed significant CSF leucocytosis with neutrophilic predominance and high CSF protein (>100?mg/dl) in 78.3%, especially in acute bacterial meningitis compared to the non-bacterial meningitis group. Patients with TBM showed lymphocytosis in CSF.Senstivity of CSF Gram stain was 22.7%. In comparable studies, Bijay R Mirdhaet al10 and Nandithachinchankar et al11 reported 74% and 67% Gram stain positivity respectively. In the present study, out of 60, organism was isolated from CSF Culture in 4 patients. In suspected cases of Bacterial Meningitis, CSF culture positivity was seen in 22.2%. However, the CSF LAT was positive in 14 cases. Out of the 18 suspected cases of Bacterial meningitis, LAT was positive in 77.8% patients. Sensitivity of 77.8% of CSF LAT was seen in our study.Chinchankar N, et al11 in their study conducted at KEM hospital Pune (2002)12 found LAT was positive in 78% and culture grew causative organisms in 50% of cases.Das BK, Gurubacharya RL, Mishra OP, Mohapatra TM, in their study at Varanasi (2003)13 found CSF culture was positive in 2 (6%) cases and the sensitivity of LAT test was 83% with the common etiological organisms were S. pneumoniae, H. influenzaetype b and N. meningitidis-A and S. pneumoniae were isolated in all age groups. In a study by Putta et al., 14 out of 50 cases of acute pyogenic meningitis, LAT was found to be having sensitivity 71.43%. In our study, Out of these 14 patients with CSF LAT positive, Streptococcus pneumonia was positive in 5 cases (27.7%), Haemophilus influenza was positive in 8 cases (44.4%) and E. coli was positive in 1 case (5.50%). Most commonest organism was H. Influenzae followed by Streptococcus pneumoniae and E.coli.

Meningitis is a major cause of morbidity and mortality in infants and children below 5 years of age. Over one third of the total cases of meningitis were due to viral infection, while bacterial infections was the second most common etiology with Haemophilusinfluenzae type b infection being the commonest organism. CSF LAT sensitivity is 78%. LAT provides rapid microbiological diagnosis of acute bacterial meningitis earlier than culture so as to guide the clinicians for adminis-tration of appropriate antibiotics. Neurological deficit was seen in 41.9%, 55.5% and 11.1% cases of viral meningitis, TBM and ABM cases respectively. Overall case fatality rate was 21.7%.