Abstract:
Congenital diapghramatic hernia (CDH) is a rare entity with incidence of 1:7000 live births. The concern to know about this case is its mortality and morbidity. It can be detected antenatally with options for fetal interventions . Left side hernia i.e., Bochdalek hernia is more common , only 8- 15 % reported to be right side.

The most common type of CDH is left sided Bochdalek hernia (85%). In left sided hernia the large and the small bowel with or without intra abdominal solid organ may be herniated into the thorax liver herniation associated with bad prognosis.

The right CDH is less common(incidence 13%) and owing to the high probability of liver herniation in these cases, chest x-ray and liver scintigraphy or CT are considered as best diagnostic methods2. Even though majority of such cases occur as isolated entity, it is important to look for other congenital malformations like cardiac anomalies, lung agenesis or hypoplasia, renal agenesis, hydronephrosis, spina bi??da and chromosomal anomalies such as Trisomy 21, 18 or 13 which can coexist along with CDH. Familial inheritance is reported to occur in 2% of the cases. In prenatal diagnosis, USG is highly sensitive to detect CDH. Bowel loops are seen to have peristalsis in the thorax instead of abdomen. The key to survival of these patients depends on the prompt diagnosis, prenatal management, delivery, stabilization and treatment. The site, size, contents of the hernia and associated anomalies also greatly in??uence the outcome of the disease. CDH is also reported to occur in babies of the mothers who are exposed to quinine, thalidomide and antiepileptic drugs during pregnancy3 .

Case Study:
A 7 month old female, full term, normal vaginal delivery presented to our hospital with complaint of on and off episodes of cough and cold, breathlessness especially after feeds since two months. and no antenatal ultrasonography done. On examination, the child was found to be tachypneic with a respiratory rate of 60 breaths per min with mild intercostal retractions and decreased air entry on the right side. No scaphod abdomen . Chest radiograph shows liver and stomach protrude into the thorax. (Fig.1.) 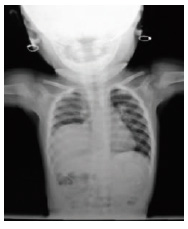 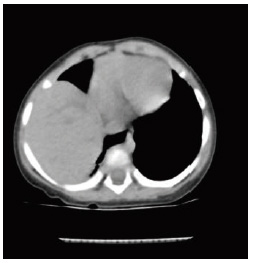 Operative Procedure :
The child was taken for thoractomy through right subcostal incision through posterolateral approach. Intra-op ??nding of liver and part of stomach into right thorax .Sac Identi??ed and removed. Diapghram repaired(FIG.3). 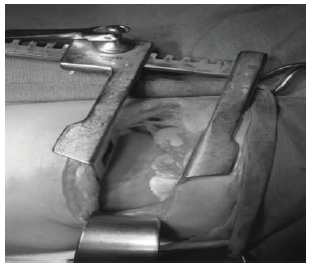 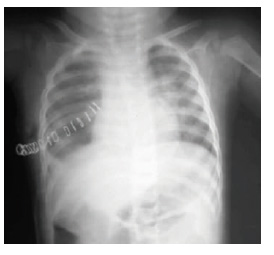 Discussion:
The diaphragm develops between 3 to 8 week of intrauterine life. It mainly develops from four components:

1. Septum transversum: forms the central tendon of diaphragm. During the third embryonic week, the growing head fold of the embryo transfers septum transversum to a position caudal to the heart. This mesoderm forms the central tendon of the future diaphragm. It also contributes to the connective tissue of the pericardium, the capsule and connective tissue stroma of the liver.

4. Muscular ingrowth from the lateral body walls. There may be failure of development of any one of the aforesaid components or their fusion which will lead to CDH. The posterolateral defect known as Foramen of Bochdalek is the most common form and in 85 to 90% of cases it is on the left side. It is caused by failure of the pleuroperitoneal membrane to close the pleuroperitoneal canal. The preponderance of left sided defect is likely related to the earlier closure of right pleuroperitoneal canal. Parasternal hernia through Foramen of Morgagni and hernia through esophageal hiatus are occasionally seen 7.

The present case is a unilateral isolated defect. The survival rate is highly in??uenced by the presnce of other associated congenital or chromosomal abnormalities. In a retrospective study conducted and it was found that 26% of CDH were associated with congenital malformations like congenital heart defects, lung agenesis or hypoplasia, hydronephrosis and spinabi??da9. Chromosomal anomalies like Trisomy21 , 18 or 13 were present in 9.5% 0f cases. In thepresent case there is Patent Foramen Ovale with Left to Right Shunt. Usually child presents with malnutrition and present after 1 month of birth. This is unlike the classic presentation of CDH. Our patient was well developed and presented late i.e. 5 months of age .Our case illustrates the importance of considering a late – presenting CDH as differential diagnosis in infants with prolonged respiratory symptoms.In severly affected newborns, respiratory distress develops at birth. Whereas a large majority present respiratory symptoms within 24 hrs of birth, only 2.6-10% of the cases may present after this period. It has been seen that the proportion of right -sided CDH in late – presenting cases is higher. In retrospective view of patients with right CDH, the mean age for diagnosis to be six months4.A study of late-presenting CDHs was done using a large multicentric database in Out of 3098 cases, 2.6% (79) cases met the inclusion criteria of late presenting CDH4. Usually right sided CDH presents with gastrointestinal problems and left sided CDH presents with respiratory symptoms5.A study have reported a nine month old infant with a right CDH masquerading as staphylococcal pneumonia. Even though many studies were conducted on CDH and many advanced surgical techniques have evolved, it still constitutes one of the major surgical emergencies in the newborn. The mortality rate is still high about 75% depending on the severity of pulmonary hypoplasia and pulmonary hypertension. Pulmonary hypoplasia along with surfactant dysfunction will lead to small alveolar capillary membrane and the gaseous exchange will become jeopardized. Originally, the membranes form a large part CDH due to defect in the central tendon could be either unilateral involving the right or left half or may be central with peritoneopericardial hernia. In the present case the defect was noticed at the junction between the central tendon and the right dome of diaphragm. It could be due to the defect in the formation of septum transversum or its failure to fuse completely with pleuroperitoneal membrane. The early growth of liver through the defect could also be an important predisposing factor to central tendon defect in the present case6.