Material And Methods:
The present study was conducted at Department of Pediatrics of Shree Vasantrao Naik Govt. Medical College and hospital, Yavatmal from, June 09 to May10.

Jaundice is the commonest abnormal physical finding in the neonates3.The overall incidence of neonatal jaundice as reported by various Indian workers varies from 54.6% to 77% 4. Jaundice occurs when the liver cannot clear a sufficient amount of bilirubin from the plasma.5 Yellowish discoloration of the skin is the result of accumulation of unconjugated non-polar lipid soluble indirect reacting bile pigment.6

Assessment of jaundice should be done in the natural light. The pulp of finger or thumb is pressed on baby’s skin, preferably, over a bony part till it blanches and underlying skin is noted for yellow colour.

Material And Methods:
The present study was conducted at Department of Pediatrics of Shree Vasantrao Naik Govt. Medical College and hospital, Yavatmal from, June 09 to May10.

Selection of cases:
The babies delivered at the hospital as well as babies referred from peripheries of age between 0- 28 days in 1 yr duration were included in this prospective study. All the neonates i.e. full term, preterm, healthy and sick neonates were included.

Sample size:
Comprised of 120 neonates with jaundice (those with serum bilirubin more than 10 mg/dl) hospitalised in pediatric units at V.N. Govt. Medical College and hospital during study period.

Inclusion criteria:
1)Neonates with jaundice delivered inside or outside the institute ,admitted in NICU and pediatric ward respectively at Government Medical College, Yavatmal during study period.2)Age group between 0-28 days.3)Neonates of either sex male/female.4)Those were willing to participate in the study.

Method:
Jaundice was ascertained by clinical methods and was confirmed by biochemical methods. Each baby delivered at hospital was carefully observed from birth onwards in day light, for appearance of jaundice. In babies with dark complexion, digital pressure over fore head was used to detect the icterus.

In addition, babies coming from peripheries were examined thoroughly clinically and detailed investigations (given below) were done to detect the cause of jaundice using predesigned proforma.

Detailed antenatal, natal and postnatal history was taken. Thorough clinical examination of every baby was done and all the necessary investigations for hyperbilirubinemia were carried out. Babies were treated according to need by phototherapy, drug therapy and exchange transfusion. Serum bilirubin levels were monitored from time to time. Newborns were treated according to standard guidelines and observed throughout their stay in hospital. 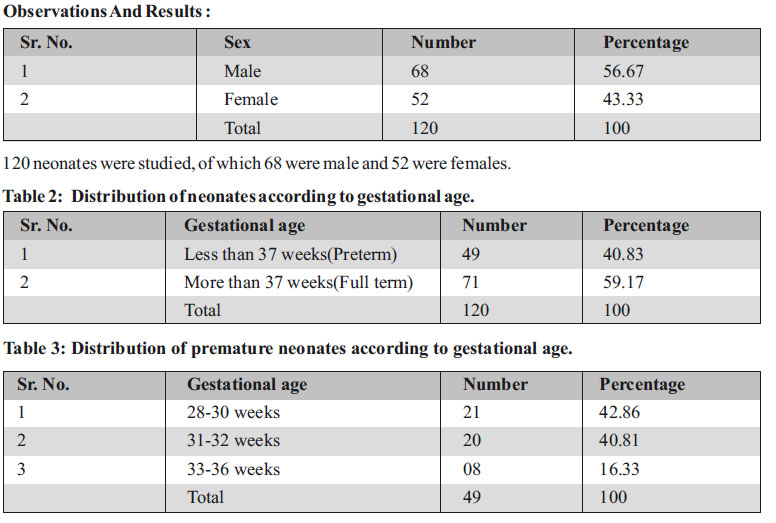 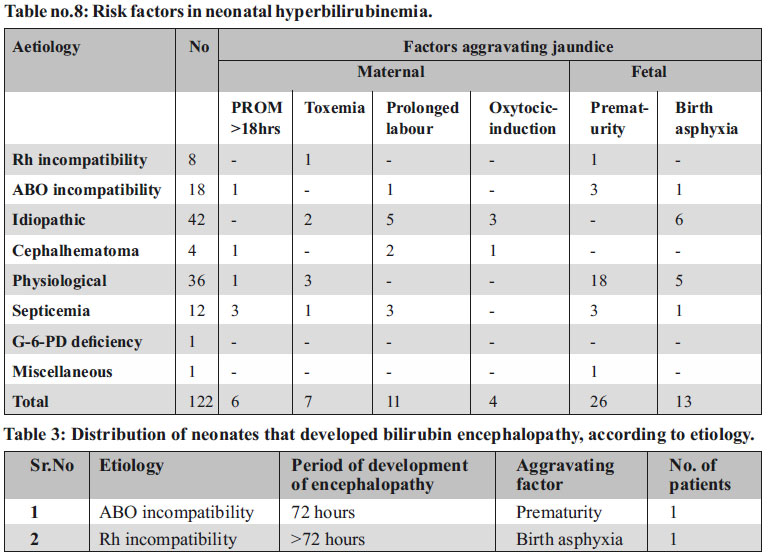 Of the total 120 neonates, 104 neonates were treated with phototherapy only and 16 neonates had to undergo exchange transfusion in spite of phototherapy.

As seen in table, the mean drop of bilirubin in Rh incompatibility after exchange transfusion was 12.9 mg/dl, in ABO incompatibility 11.5mg/dl, in septicemia 11.4mg/dl, in idiopathic hyperbilirubinemia 9 mg/dl and in a case of G-6-PD deficiency, it was 13.8 mg/dl.

In present study mean drop in bilirubin level was found to be 9.6mg/dl in the group, which received phenobarbitone as compared to 9 mg/dl in group which did not.

Maternal Factors:
As shown in above table, premature rupture of membrane was seen in 6 neonates of which 1 neonate had ABO incompatibility, 1 neonate had cephalhematoma, 1 had physiological hyperbilirubinemia and 3 neonates had septicemia.

Toxaemia of pregnancy was seen in 7 cases of which 1 had Rh incompatibility, 2 had idiopathic jaundice, 3 cases had physiological hyperbilirubinemia and 1 had septicemia.

Prolonged labour was seen in 11 cases of which,1 had ABO incompatibility,2 neonates had cephalhematoma,3 neonates had septicaemia and 5 neonates had idiopathic hyperbilirubinemia.

Oxytocin induction was done in 4 cases, out of which 3 had idiopathic hyperbilirubinemia and 1 neonate had cephalhematoma.

Discussion:
A total of 120 neonates of neonatal hyperbilirubinemia were studied in detail.

Sex Distribution:
Out of 120 neonates of hyperbilirubinemia 67% were males.

Narang et al12 have also found a male predominance in their studies with 56.2% cases of male sex.

Singhal et al13 have found prematurity as the second most common cause of hyperbilirubinemia in their studies. Prematurity was seen in 16.7% cases. Narang et al12 found jaundice in 440 (47.9%) out of 917 preterm babies.

Narang et al12 concluded from their studies that the incidence of neonatal jaundice was three times higher in LBW babies compared to babies above 2500 g.

In our study 66.66% neonates were low birth weight, it is mainly because of maternal under nutrition, poverty, under utilization of health services and illiteracy seen in this rural area.

Aetiology:
Physiological hyperbilirubinemia:
In 36 neonates, the jaundice was physiological as it appeared between 48-96 hours and disappeared by 6-7 days in term and 10-12 days in preterm infants. Peak serum bilirubin was seen on 4th day in term and 7th day in preterm babies.

In studies by Merchant R.H. 14, physiological jaundice was seen in 25.3% cases. Our ndings are close to their fndings.

Idiopathic hyperbilirubinemia:
In maximum number of neonates i.e 42 (35%) in our study, we were not able to find any cause and they were classified as idiopathic.

Septicemia:
In 12 neonates septicemia was the cause of jaundice, out of which 3 neonates were full term and 9 neonates were preterm. One preterm baby had ABO incompatibility along with septicemia.

Blood culture was positive in two neonates; E.Coli was isolated in both of them. Meningitis was feature in three cases with CSF picture suggestive of meningitis. All the neonates were treated with appropriate antibiotics.

G-6 PD deficiency: It was found in one neonate. There was history of affection of previous two male children. Baby developed jaundice between 48-72 hours. Peripheral smear was suggestive of hemolytic anemia, reticulocyte count was very high. G-6-PD de ciency was found in 2.6% neonates by Merchant et al14, in 5.1% neonates by Singhal et al13 and in 3.4% neonates by Narang et al12. Our ndings are closer to Merchant et al14.

Miscellaneous group: It consisted of one neonate. The baby had many congenital anomalies in the form of contractures of knee and elbow joints, craniosynostosis, ambiguous genitalia, and bilateral Grade II hydronephrosis on ultrasonography of abdomen. The mother had history of previous two intrauterine deaths. This baby died on seventh day.

Bilirubin Encephalopathy: Two babies developed bilirubin encephalopathy. Of them one was premature with ABO incompatibility and other was a term neonate with Rh isoimmunisation. The premature neonate developed signs of encephalopathy at 72 hours and term neonate after 72 hours of age. Exchange transfusion was done in both of them. The term baby also had birth asphyxia.

Verma et al51 found Kernicterus in 10.4% of cases of which maximum cases were of G-6-PD de ciency followed by idiopathic hyperbilirubinemia and Rh incompatibility.

In our study addition of phenobarbitone was not associated with any signi cant additive effect as compared to phototherapy alone. This nding is similar to that Lall J.C. et al34.

Our results are correlating with that of Singhal et al who found similar complications without any mortality.

Risk Factors:
Maternal: In the present study maximum number (11) of babies who developed jaundice had prolonged labour, 7 neonates had history suggestive of toxemia of pregnancy, 6 neonates had PROM more than 18 hrs and 4 neonates had oxytocin induction of labour.

Foetal: In 26 neonates prematurity was the aggravating factor while in 13 neonates the history was suggestive of birth asphyxia.

Narang et al12 found oxytocin induction as a cause of hyperbilirubinemia in 2.4% cases. Singhal et al13 have found prematurity as a cause of jaundice in 16.7% of neonates. They have also found birth asphyxia as aggravating factor for hyperbilirubinemia in 12.1% cases out of which maximum were in idiopathic group. Our ndings correlate with ndings observed by Singhal et al13.

Conclusion:
1.Most common cause of hyperbilirubinemia requiring exchange transfusion was ABO incompatibility and idiopathic jaundice followed by Rh incompatibility, septicemia and G-6-PD de ciency.2.Phototherapy is a cheap and effective way to reduce bilirubin levels in neonatal jaundice. It is also effective in lowering the bilirubin levels in hemolytic hyperbilirubinemia and thus reducing the need for exchange transfusion. The side effects associated with phototherapy are few and not serious.3.The addition of phenobarbitone is not having any signi cant additive effect as compared to phototherapy alone.4.Though exchange transfusion is risky procedure, mortality is nil.5.Bilirubin encephalopathy is a dreaded complication if hyperbilirubinemia is not treated in time. It is more common in premature neonates and in those with a history of birth asphyxia.