Abstract :
Alexander disease (AD) is a rare, lethal leukodystrophy of the central nervous system of unknown etiology. AD is characterized by progressive failure of central myelination and the accumulation of Rosenthal fibers in astrocytes. Symptomatically, AD is associated with leukoencephalopathy with macrocephaly, seizures and psychomotor retardation in infants, and usually leads to death within the first decade. Its characteristic magnetic resonance imaging (MRI) findings have been described as demyelination predominantly in the frontal lobe. Moreover, dominant mutations in the GFAP gene, coding for glial fibrillary acidic protein (GFAP), a principal astrocytic intermediate filament protein, have been shown to lead to AD. The disease can now be detected by genetic diagnosis. We report a case of 8 year old child with onset of disease at the age of 9 months with global developmental delay, macrocephaly, seizures along with psychomotor retardation & spasticity, who is currently on symptomatic treatment.

Introduction:
Alexander disease (AD) is a rare, progressive, autosomal dominant leukodystrophy affecting the central nervous system (CNS) white matter with frontal lobe preponderance. It was first described in 1949 by W. Stewart Alexander. But the first genetically proved case of AD was reported by Brenner’s group in 2001. The most distinctive pathological feature is widespread deposition of cytoplasmic inclusions, termed ??Rosenthal fibers?? throughout CNS, mainly in perivascular, subpial, and subependymal astrocytes. The genetic basis is the presence of mutations in the glial fibrillary acidic protein (GFAP) gene1. According to the age of clinical presentation, it can be divided into three subtypes: infantile (between birth and 2 years of age), juvenile (between 2 and 12 years of age) and adult (from the second to seventh decade)2 . The infantile form is the commonest (51%), followed by juvenile (23%) and adult form (24%).The infantile form is characterized clinically by megalencephaly, developmental delay, psychomotor retardation, seizures, and a lethal progressive course. Magnetic resonance imaging (MRI) is useful for diagnosis and shows extensive cerebral white matter changes with a frontal predominance and relative sparing of occipital and temporal white matter and in some patients abnormalities of the basal ganglia and the thalamus1.We are presenting a case of infantile form of AD with typical clinical characteristics & MRI features.

Case Report:
A 8 year old male child first issue of a non consanguineous marriage who was born of full term uneventful pregnancy was brought to OPD with complaints of global developmental delay in the milestones which the mother noticed at 9 months of age following which the child was brought to our attention. Later at the age of 1.5 years the child had GTC convulsions which were unresponsive to a single anticonvulsant and was maintained on two antieplieptic drugs (AED) (sodium valproate & clonazepam). Patient was relatively seizure free on these AED’s. There was no family history of seizures or neurological illness.

On examination, child’s head circumference was 50cms (??97th percentile), height was 70 cms (between 3rd & 50th percentile), weight of 7kg (3rd percentile). Child did not have any neurocutaneous markers. On neurologic examination, cranial nerves were normal , spasticity was present with brisk deep tendon reflexes & extensor plantars bilaterally. His fundus examination did not show any abnormality. Examination of other systems was unremarkable.

Based on clinical presentation of patient with neuroimaging confirming a diagnosis of AD, we started the patient on sodium valproate & clonazepam for his refractory seizures & regular physiotherapy for his spasticity with regular follow up. At present, at 8 years of age the patient is bedridden with marked spasticity in all limbs with contractures of ankle & wrist joints bilaterally with no speech but intact vision & hearing.

Discussion: Alexander disease (AD) is an autosomal dominant leukodystrophy with frontal lobe preponderance that predominantly affects infants and children and usually results in death within ten years after onset. AD is characterized by progressive failure of central myelination and leukodystrophy on MRI and pathologically by the presence of Rosenthal fibers (eosinophilic cytoplasmic fusiform inclusions within astrocytic processes) adjacent to areas of demyelination3. Rosenthal fibers are protein aggregates containing GFAP, ubiquitin, heat shock protein (HSP-27), and ?-crystallin4. Mutation in the GFAP gene encodes GFAP protein has been proven to cause AD. According to the age of clinical presentations, it can be divided into three subtypes: infantile (between birth and 2 years of age), juvenile (between 2 and 12 years of age) and adult (from the second to seventh decade)2 . The infantile form is the commonest (51%), juvenile (23%) and adult form (24%).

Singh et al., suggested neonatal form as subset of infants with neonatal onset (i.e., within 30 d of birth)3,5 . Infantile AD presents in the first two years of life, typically with progressive psychomotor retardation with loss of developmental milestones, convulsions, macrocephaly, hyperreflexia and pyramidal signs, ataxia, hydrocephalus secondary to aqueductal stenosis, and predominant cerebral white matter abnormalities in the frontal lobe on brain MRI2.Our patient had a similar clinical presentation with global developmental delay, convulsions, macrocephaly with spasticity & hyperreflexia but with absence of hydrocephalus. Juvenile patients have a slower clinical course (with bulbar signs, ataxia, and spasticity), and their intellectual abilities are usually preserved3,6. Adult patients have heterogeneous symptoms; some patients have relapsing-remitting neurological symptoms that mimic multiple sclerosis and are only diagnosed as AD during neuropathological examination. None of the patients with adult onset had macrocephaly, seizures, or cognitive defects 3,6 . 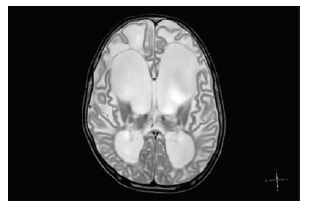 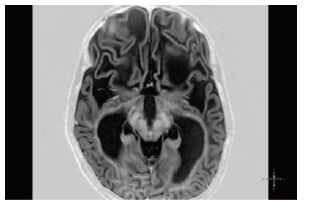 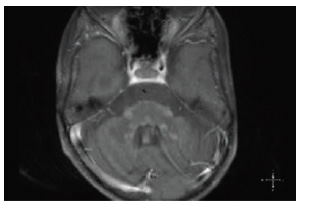 4) Brain stem abnormalities, in particular involving the midbrain and medulla

Our patient satisfies four out of five MRI criteria.

The clinical picture mimics that of other neurological disorders like leukodystrophies, Canavan disease, Mitochondrial myopathy, Encephalopathy, Lactic Acidosis and Stroke (MELAS), Leigh disease, glutaric aciduria, organic aciduria, and Zellweger syndrome1,6. In glutaric acidurias, early accelerated head growth with normal intellectual function can precede neurological deterioration and MRI shows selective frontotemporal atrophy especially involving subcortical white matter with prominent extra axial CSF collections1,6,8. In X-linked adrenoleukodystrophy, the white matter involvement is most severe in the parietal and occipital lobes 1,6. In metachromatic leukodystrophy, MRI reveals a hyperintense signal in the periventricular and central white matter on T2 weighed images, which may initially be limited to parieto-occipital region and contrast enhancement is not a feature of this disease1,6,8,9. Canavan disease is characterized by a combination of macroencephaly, extensive cerebral white matter changes (without frontal preponderance), and basal ganglia abnormalities7. M R Spectroscopy may be diagnostic revealing an elevated N-acetyl aspartate to creatinine ratio1,8. In Krabbe disease, MRI demonstrates symmetric high signal intensity areas in the deep white matter and abnormal signal intensity in the thalami1,9. In adrenoleukodystrophy, MRI shows symmetric confluent demyelination in the peritrigonal white matter and the corpus callosum and no abnormality of the periventricular white matter 1,9. In Leigh disease, T2 weighted MRI image shows bilateral high signal intensity areas in the putamen and globus pallidus1,9 .The parietal and occipital lobes along with basal ganglia are frequently involved and follow up MRI images may show resolution and subsequent reappearance of the abnormal areas in MELAS1,9 . MRI shows diffuse cerebral white matter swelling with appearance of subcortical cysts, particularly in the frontotemporal regions in vacuolating megalencephalic leukoencephalopathy with subcortical cysts7.

No specific therapy is currently available for AD. Management is supportive and includes nutritional care, antibiotic treatment for intercurrent infection, antiepileptic drugs for seizure control, physiotherapy and occupational therapy. We have started a similar line of treatment for our patient. Assessment is required for feeding/eating, gastrointestinal problems , growth measurements, psychological assessment for older patients, family and social structure to determine availability of adequate support system.

Acknowledgement: The Authors would like to thank the Dean of ESI-PGIMSR Andheri, Mumbai, for granting permission to publish this manuscript & Dr. Jitendra Ashtekar (Radiologist at ESI PGIMSR) for MRI reporting.