ABSTRACT:
Oxidative stress is an important factor in deciding the extent of damage due to hypoxic ischemic injury in newborns. The present study was carried out to find out the relationship of superoxide dismutase (SOD) and reduced glutathione (GSH) level in cerebrospinal fluid (CSF) and severity of hypoxic ischemic encephalopathy (HIE) and how it helps to predict the mortality outcome in newborn suffering from birth asphyxia. This is across sectional hospital based study done in a tertiary level teaching hospital and the subjects were intramural newborns suffering from birth asphyxia and admitted in NICU of Burdwan medical college and hospital. The values of SOD were found to be 84.45±11.56, 54.32±19.02, 32.53±13.82 SOD U/ml of CSF respectively in 3 stages of HIE (P<0.001, r=-0.8). The obtained values of GSH for 3 stages of H I E being 1361.54±272.84, 1045.56±289.78, 693.68±187.49 ng/ml of CSF respectively ( P<0.001,r = -0.722 ) and both the antioxidants were found to be significantly low in newborns who expired when compared to survived newborns. So mortality of newborn suffering from birth asphyxia depends on the amount of free radical injury as connoted by reduction in free radical scavenging enzymes. Hence we can conclude that biochemical parameters like superoxide dismutase and reduced glutathione levels in cerebrospinal fluid not only get altered significantly but also the levels may suggest the extent of free radical injury during the process.

INTRODUCTION:
Neonatal encephalopathy associated with perinatal asphyxia is called hypoxic ischemic encephalopathy (HIE). The incidence of HIE is reportedly high in countries with limited resources. Birth asphyxia is the cause of 23% of all neonatal deaths worldwide. More than a million children who survive birth asphyxia develop problems such as cerebral palsy, mental retardation, learning difficulties, and other disabilities.[1,2]According to the National Neonatal Perinatal Database Network, the perinatal asphyxia is the most common cause of neonatal death in intramural live births.[3]At the cellular level, neuronal injury in HIE is an evolving process. The magnitude of the final neuronal damage depends on duration and severity of the initial insult combined to the effects of reperfusion injury, and apoptosis. At the biochemical level, a large cascade of events follows HIE injury. In view of its complexity, HIE still remains to be a puzzle for the neurologists and neonatologists with regard to the pathophysiology, type and timing of intervention.Sarnat and Sarnat HIE grading system in term babies has been used by several authors and is the basis for most modern evaluation schemes. Since then many attempts are done to improve the scoring system in HIE with inclusion of Magnetic resonance imaging, Electroencephalogram, Visual Evoked Response, MR Spectroscopy, Near- Infrared Spectroscopy, Ultrasound and Doppler and Biomarkers. Enzymes, such as lactate dehydrogenase, brain specific creatine kinase and enolase have been advocated as predictors of outcome after brain lesions as clinical observations have inter & intra observer variations in absence of any useful marker.[4,5,6]

The present study was carried out to know the relationship of superoxide dismutase and reduced glutathione level in CSF with different grades of hypoxic ischemic encephalopathy in newborn and how these free radical scavenging enzyme and antioxidant in CSF predict the mortality in newborns with HIE.

MATERIAL AND METHODS:
After developing parameters and indicators and taking necessary permission from the concerned authority and ethical committee, a cross sectional, analytical study was carried out at the department of Pediatrics, Burdwan Medical College & Hospital, Burdwan from April 2010 to March 2011.

Standard treatment for HIE was given to all subjects during the study. Informed written consents and co operation was sought from parents of each study subject before initiation of the study according to the pre designed, pre tested schedule. Relevant history was taken and previous medical records were checked. Necessary measurements were recorded using standard tools and techniques. Gestational age was assessed by menstrual period and by the method of Ballard(II).[9] Staging of HIE was done according to the criteria of Sarnat and Sarnat.[10] Cerebrospinal fluid was drawn between 12 and 48 hours of life for estimation of Superoxide dismutase by Kakkar’s modified method[11] and reduced glutathione by Beutler E et al method.[12] CSF was also studied for excluding meningitis. 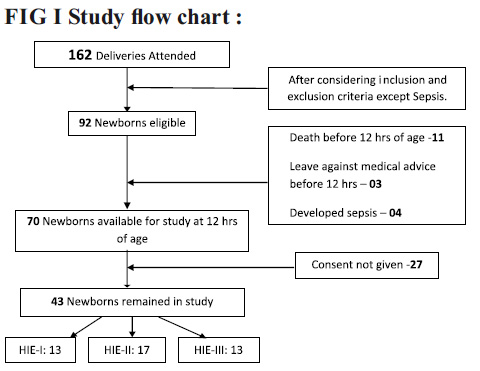 RESULTS :
Data compilation was done and results were analyzed by using SPSS statics 17.0 version. Categorical variables were compared by Chi square test or Fischer’s exact test; Comparison between three quantitative variables was done by one way ANOVA test. P value less than 0.05 (P< 0.05) was considered as significant.Total of 70 neonates were available for study as per inclusion and exclusion criteria. In 27 cases consent could not be taken hence excluded from the study. 43 neonates were studied and categorised according to Sarnat and Sarnat staging (Fig.1). Baseline characteristics of study subjects were comparable between the groups (Table – I).

DISCUSSION:
Few studies have reported levels of Superoxide dismutase in CSF in newborns with birth asphyxia and HIE. The levels of superoxide dismutase was shown to be decreased with severity in birth asphyxia in a study conducted by Nangia et al.[13] The SOD levels were recorded to be 30.47 ± 11.8 45.29 ± 28.7 and 60.9 ± 24.5 U/ml respectively in expired, morbid and normal survived newborn babies. In above study, the CSF was collected between 12 to 48 hours. The reason for decrease was thought to be due to either this protective enzyme was utilized to neutralize or scavenge superoxide radical and its levels were in turn lowered in the affected newborns, (where free oxygen radicals are formed) or that its substrate induced up regulation or stimulation had not occurred either due to some defect in the stimulation and synthesis sequences or a defect at the gene level. This finding is also supported by two other studies. [13,14,15] In another study where CSF was collected at about 72 hours of life; study group found that activity of S O D in C S F was significantly higher in infants with HIE compared with controls (p<0.05).[16] The higher value of SOD in that study might be due to fact that there could be a delay in up-regulation of SOD enzymes genes in response to asphyxia which may have overcome with time with an increase in its levels as found in study by Glucan et al. As GSH is a very potent antioxidant in body and get used up during oxidative stress. Most of the studies regarding the levels of GSH in birth asphyxia are done in blood samples of newborns. Moreover there are no studies regarding CSF level of GSH in HIE and its relation to severity of HIE according its grade. In our study, it was found that CSF SOD and GSH levels were found to be significantly low in newborns who expired as compared to survived newborns. It shows that fate of newborns suffering from birth asphyxia depend on the amount of free radical injury as suggested by low levels of superoxide dismutase and reduced glutathione. We found that the outcome of newborn suffering from birth asphyxia depends on the amount of free radical injury as connoted by reduction in free radical scavenging enzymes and antioxidant in CSF. Thus low levels of superoxide dismutase and reduced glutathione correlates with more severe grades of HIE and newborn mortality.

CONCLUSION:
Oxidative stress is an important factor in deciding the extent of damage due to hypoxic ischemic injury. Biochemical parameters like superoxide dismutase and reduced glutathione levels in cerebrospinal fluid not only get altered significantly in HIE but also their levels may suggest the extent of free radical injury during the process. The reduction in the levels of SOD & GSH has been associated with severe grade of HIE and also poor outcome. This type of studies are helpful for better understanding of relationship between antioxidant and free radical scavenging enzymes in CSF and the extent of damage due to hypoxic ischemic reperfusion injury after birth asphyxia so that antioxidant level in CSF with a cut off value, can be a useful marker and may serve as a guide for staging in HIE and also for assessing prognosis in time to come. This will also help in better understanding of the problem and will be helpful in development of specific and effective drugs for neuroprotection or for post insult therapy.

8. [Guideline] Committee on fetus and newborn, American Academy of Pediatrics and Committee on obstetric practice, American College of Obstetrics and Gynecology. Use and abuse of the APGAR score. Pediatr. 1996;98:141-142.