ABSTRACT
Malaria associated HLH is well known but under diagnosed. We report an 18 month child with falciparum malaria who after completion of treatment with antimalarials and parasite clearance did not show clinical improvement. She was subsequently diagnosed with HLH and started on dexamethasone, cyclosporine and etoposide. Within a week child showed dramatic improvement.Hence,malaria associated HLH should be suspected and treated promptly.

INTRODUCTION
HemophagocyticLymphohistiocysis (HLH) is a rare disorder.The incidence of familial HLH in children has been reported as 1.2 per million [1] but that of infection associated HLH is still uncertain.Thoughmalaria as a cause of secondary HLH is well known, it has been under-reported. To the best of our knowledge only12 cases of malaria associated HLH have been reported worldwide. [2,3,4,5,9,13,14,15,16,17,18,19] Of this only 5 cases have been documented in children and none of them required specific treatment for HLH.[2,3,4,5,9]In spiteIndia being an endemic country for malaria, HLH still remains under diagnosed.Hencehere we highlight an uncommon aspect “HLH” of a very common disease “malaria” and report a case of 18 month old child with P.falciparum malaria associated HLH who improved only after treatment as per HLH 2004 protocol. [1]

CASE:
18 month old girl presented with high grade fever and vomiting of 5 days duration. She had no medical or surgical illness in the past. On examination she was febrile (temperature-39.5 0C) and irritable. She had pallor,firm palpable liver and spleen of 4cm (span – 10 cm) and 5 cm respectively. There was no significant lymphadenopathy or icterus. On investigations the initial CBC showed pancytopenia (Hb – 7.9 g/dl, TLC- 3400/mm3, ANC-884, platelet – 40000/mm3), peripheral smear revealed trophozoites of Plasmodium falciparum with a parasitic index of 20% and elevated liver enzymes (AST – 240.8 and ALT – 115.8 IU/L).Her renal and metabolic parameters were normal. The child was started on injection artesunate and oral clindamycin. Three days later the peripheral smear was repeated which showed complete clearance of malarial parasite but the child continued to remain febrile and irritable. Hemoglobin further dropped to 5.5 g/dl with persisting leukopenia and thrombocytopenia. Blood culture, urine culture, Chest X-ray, USG abdomen, CT brain and lumbar puncture revealed no other focus of fever. Despite packed cell transfusion, the hemoglobin did not improve. Direct Coombs test, reticulocyte count and repeat peripheral smear were not suggestive of active hemolysis. In view of persisting high grade fever, splenomegaly and pancytopenia even after completion of 7 days IV antimalarials, HLH was suspected and work up sent accordingly revealed : Serum triglyceride- 310.9 mg/dl , ferritin- 3560 mcg/L , LDH- 4000 IU/L, bone marrow aspiration and biopsy showed marked increase in histiocytes without obvious evidence of hemophagocytosis . The child fulfilled 5 of 8 HLH 2004 criteria viz. fever, splenomegaly, pancytopenia, hyperferritinemia and hypertriglyceridemia. She remained symptomatic even 5 days after completion of antimalarial treatment and ongoing supportive care, hence was started on treatment as per HLH 2004 protocol. On 3rd day of treatment fever subsided, child improved dramatically and lab parameters which were repeated on day 7 revealed significant improvements. She was discharged in the 2nd week of treatment on oral steroids and cyclosporine. Unfortunately, she presented to the casualty 3 days later with foreign body aspiration and succumbed in spite of all resuscitative efforts. 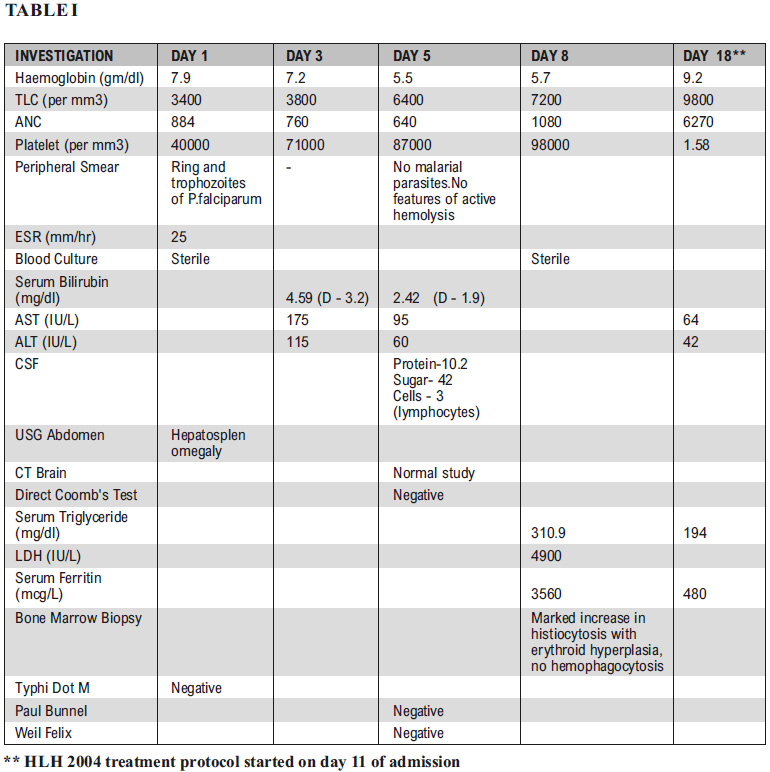 DISCUSSION:
Infection associated HLH in children is a rare entity.The largestpaediatric case series of 122 patients studied over 6 yearsacross 11 countries reported by the International Registry for HLH, Histiocyte Society, showed only 40% of HLH in children being associated with infections.[20]There is paucity of data about HLH from India.Largest Indian case series of 43 patients studied over 2 years showed Infectious etiologyin 14 (42%) children, with viruses accounting for the majority.[12]

Similar observations have been made in other case series across the world in Thailand(52 cases)[10], Vietnam(33 cases)[6], Iran(7 cases)[8],Taiwan(18 cases)[11],India(7 cases).[7]None of these case series have reported malaria accounting for HLH.

Till date to the best of our knowledge only 5isolated cases of Malaria associated secondary HLH in children have been reported worldwide,[2,3,4,5,9]of which only two have been from India, in spiteof being an endemic country.[5,9] 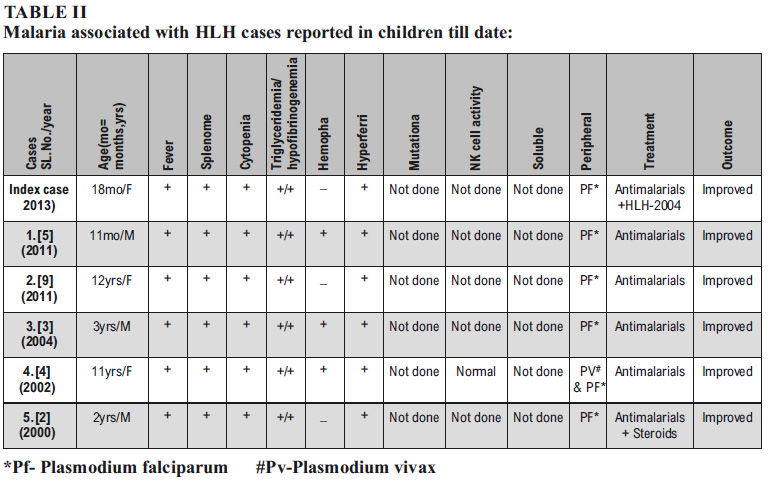 In spite of treatment with antimalarials(7 day course of inj. Artesunate and oral clindamycin)and repeat peripheral smear showing clearance of parasite, she continued to remain febrile with persistence of splenomegaly and bicytopenia. Unlike the other 4reported cases which responded to antimalarials and supportive care[3,4,5,9] and only1patient requiringsteroids[2],our case improved dramaticallyafter 3 days of receiving etoposide, cyclosporine and dexamethasone as per the HLH 2004 protocol. This is the first paediatric case of P.falciparum malaria with HLH to be put on HLH 2004 protocol based treatment that did not show clinical improvement with antimalarials and supportive care. Hence we highlight the need of treatment for secondary HLH with full protocol if not improving with specific and supportive treatment. Unfortunately we could not complete the planned protocol for the child because of her accidental death due to foreign body aspiration.

CONCLUSION: HLH which is a fatal but treatable condition should be suspected as a complication of malaria in patients who do not show clinical improvement even after parasitic clearance. Histopathological evidence of hemphagocytosis need not be chased for labelling and treating the diagnosis of HLH if the other criteria are met. Whenever required steroid, etoposide and cyclosoprine should be incorporated for treating secondary HLH due to malaria not responding to specific and supportive treatment.