ABSTRACT:
Congenital cystic adenomatoid malformation of the lung (CCAML) is uncommon, and usually presents with respiratory distress in early life. We describe a girl presenting with pneumonia at the age of 2 years. She had been previously healthy and active, with no previous hospitalizations for pneumonia and X-ray chest had never been done earlier on this child. A chest CT scan showed left upper and middle lobe cystic lesions suggestive of CCAML. The patient was taken for surgery and left upper and middle lobe lobectomy was performed. The pathological diagnosis was that of a congenital cystic adenomatoid malformation. A review of the relevant literature is presented.

INTRODUCTION:
Congenital cystic adenomatoid malformation (CCAM) is rare pulmonary malformation of unknown etiology. It was reported in the English literature in 1949 by Ch’in and Tang 1 in a patient with generalized anasarca. In 1977, Stocker et al. classified these lesions in three subtypes based on clinical, gross and microscopic criteria. 2 Incidence of congenital lung cysts in the range of 1 per 8300 to 35,000 live births. 3 CCAM are considered bronchopulmonary foregut malformations caused probably by an arrest in lung development between 4th and 7th week of fetal life.4In 2002 Stocker had proposed the term congenital pulmonary airway malformation (CPAM) as not all lesions are cystic nor adenomatoid.5 In this CPAM classification, five types have been described based on the morphology and histology. The clinical presentation is varied but the majority of cases present early after birth with respiratory distress. Chest computerized tomography is often diagnostic but histological examination is essential for a definitive diagnosis. Surgery is most often advocated for treatment and that also helps provide lesional tissues required for a definitive diagnosis.

The case:
A 2 years old female weighing 9 kg, presented with history of cough, cold, and breathlessness since the last one month. She was afebrile, had a heart rate of 120 beats per min and respiratory rate of 58 per min. On respiratory system examination we found dullness on left upper and middle zone, and mediastinal shift towards right side with diminished breath sound on left side. The rest of the physical examination was essential normal. White blood cell count was 1720 /mm3, Hemoglobin 8.9 gm%. and platelet count 423,000/mm3. An X-ray chest was done which showed opacity in left upper and middle lobe and mediastinal shift towards right side. 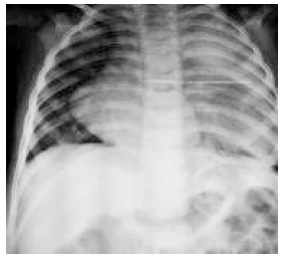 The possibility of pulmonary sequestration or congenital cystic adenomatoid malformation of upper lobe of left lung was considered. A computerized tomography of the thorax was recommended. A chest computerized tomography scan (CT scan) with contrast revealed that in the left lung there were multiple non enhancing fluid dense cystic lesions, the largest of size 2.5 x 2.3 x 1cm having a volume of 5.8ml with peripheral wall enhancement in apical and posterior basal segment of left upper lung lobe and apical, lateral basal and posterior basal segments of left lower lung lobe. Rest of left lung was normally aerated. Right lung was also normally aerated. Possibility of congenital cystic adenomatoid malformation of left lung with superimposed infection, with rightward mediastinal shift. 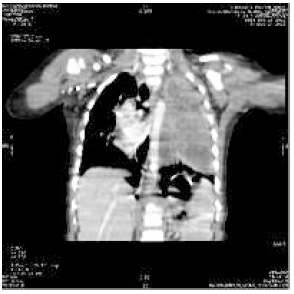 was kept Surgeon evaluated the patient and recommended left upper and middle lobe lobectomy. The specimen was received in formalin and consisted of left upper lobe measuring7.5 x 5 x 2.5 cms. External surface was well circumscribed. Cut surface showed presences of cystic dilated spaces filled with yellowish material and grey white area. At one pole there was presence of hemorrhagic area. 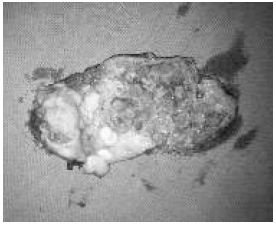 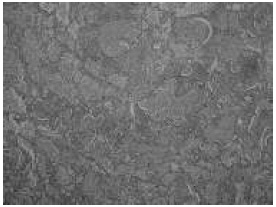 The larger view of a single cyst lined by stratified ciliated columnar bronchial type of epithelium and cyst fluid with inflammatory cells. 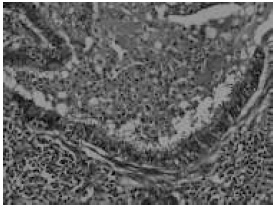 Fig.5 The larger view of a single cyst lined by stratified ciliated columnar bronchial type of epithelium and cyst fluid with inflammatory cells (hematoxylin and eosin, 400×)

Based on histopathology diagnosis of congenital cystic adenomatoid malformation was made. During post-operative period, the patient improved and was discharged home after completing a course of antibiotics. On follow-up visit she has been doing well and asymptomatic.

DISCUSSION:
Congenital pulmonary airway malformation (CPAM) is a new term proposed by Stockerfor congenital cystic adenomatoid malformation (CCAM). This is considered a better designation, as not all of these lesions are cystic or adenomatoid in nature. Five types of CPAM have been described based on morphology and histological ground. Type 0 known as acinar dysplasia or agenesis, is a rare malformation incompatible with life and usually associated with cardiovascular anomalies. Type1, the most common type, accounts for 65% cases is large, predominant cyst type that usually presents in the first days of life. Type2 is medium sized cyst with an occurrence of 10-15% of the cases. It is seen exclusively in the first year of life and has the worst prognosis, as this lesion is often associated with other anomalies incompatible with life. Type3 is the small cystic solid type and accounts for 10-15% of cases. In this recent terminology, the lesion seen in this patient was best regarded as CPAM type1.

Cystic pulmonary airway malformation of lung is a rare pulmonary malformation. It may present at birth with respiratory distress and pneumonia without previous symptoms 6 or may present with repeated pulmonary infection, puemothorax, hemoptysis, chest pain or as an incidental finding in radiologic images. 7 Severe cases may present in utero with fetal hydrops but majority of cases present in the perinatal period with respiratory distress. Few cases go unnoticed till later in life after the first six months of life or even adulthood. The rarity of this lesion, less than 300 cases, in infancy and in English literature. 6 A high level of suspicion is required to make this diagnosis. One can consider this lesion, if there is history of recurrent infections, or patient is unresponsive to conventional therapy. Radiologic images are helpful. A computerized tomography of the chest will be diagnostic, but pathology is essential for a definitive diagnosis. The etiology and pathogenesis of this lesion is unknown. The treatment modalities are different. Some authors recommend following up those lesions that remain asymptomatic. 6 Other recommend in utero resection when the lesion is significant and causes fetal hydrops. 8 Other authors recommend radical surgery for definitive diagnosis and treatment. This option eradicates the clinical symptoms and portion of lung that is otherwise nonfunctional is removed. Long term survival is relatively good depending on the amount of normal lung tissues left after surgical resection. Therefore long clinico-radiological follow up is recommended. 9