Abstract :
Introduction: Cerebral palsy represents “A group of developmental disorders of movement and/or posture, causing activity restriction or disability, those are attributable to insults to the developing brain”1. In India, only 1.4 – 2.4% of children upto 3yrs of age are reported to be having abnormal developmental milestones. Such children are neither identified nor referred early2 for immediate intervention, considered so vital for prevention of serious and permanent functional disabilities3. Objective: To screen otherwise healthy infants and children under 2 years of age attending well baby clinics for routine immunization for developmental delay, using Denver Developmental Screening Test II. Material and method: 141 infants and children reporting to immunization clinic of MGM Medical College pediatric OPD were included in the study after excluding the sick and high risk babies, having any form of congenital anomaly or any other illness. Detailed antenatal, natal and post-natal history was obtained. A single pediatrician in the OPD clinically examined all babies. All babies were subjected to DDST II screening and followed-up for subsequent 3 months. Result: 9 (6.4%) babies were having delayed development, 11 (7.8%) were having doubtful and 121 (85.8%) were having normal development. Among delayed and doubtful, 25% were having history of preterm birth, 35% low birth weight, 30% born out of LSCS and 5% had delayed cry. However, 35% of these babies had no significant history to suggest any preor perinatal insult. Conclusion: A significantly higher proportion of babies were found having developmental delay, not recognized since birth until screening. The findings are bound to sensitize our policy planners and those engaged in care of children, for early detection and urgent intervention.

Introduction:
Developmental delay could be a predictor of conditions like cerebral palsy, mental retardation and various learning disabilities.(4) Varieties of causes are attributed. Accordingly, there are different clinical presentations, depending upon the nature of insult, often in combinations. Manifestations include problems in control of movements, posture or balance, weakness and stiffness or hypotonia of limbs, with or without other associated problems such as – different forms of learning disabilities, seizures; difficulties in feeding, growth, vision and hearing. The ‘Insults’ result in distortion of the normal early neurodevelopment process due to maternal or fetal disease conditions including pre- and perinatal hypoxia, intra-ventricular and periventricular bleed, leukomalacia, prematurity, low birth weight, truma, infections, genetic, metabolic abnormalities and chance anatomic variations. It is not possible to determine the exact aetiology in 15% of them, despite all advanced investigations available. By convention, the diagnosis of ‘Cerebral palsy’ is by exclusion and not labelled unless the causal mechanism operates before 3rd birthday5 although actual diagnosis may be made much later.

However, the nervous system continues to develop for next two decades with synaptic adjustments of neurons for various neurological functions between them, usually not beyond 7 years of age.

Early diagnosis and early intervention refers to identification of cerebral palsy or similar clinical presentations during 1st year of life. Developmental delay could be a predictor of conditions like cerebral palsy, mental retardation and various learning disabilities.4 While there is no conclusive evidence that early rehabilitation does influence the severity of neurological symptoms or signs in CP, it has a strong role in supporting childparent relationship, improving care, confidence in handling and feeding. Early intervention certainly prevents unintentional neglect and derivation, magnifying neurological injury and maladaptive abnormal movement patterns; accelerating contractures, motor disability and poor quality of life. The very 1st step in early diagnosis is to establish the degree of risk for each infant in general and the high risk ones in particular, through a dev elo p men tal s urv eillan ce p rogr am. Unfortunately, only 50% with established diagnosis of CP reveal high risk factors. The rest need to be identified at an early date for timely intervention for optimal outcome.

The DDST-II :
It has a good validity and reliability12, 13as a screening tool. It consists of 125 tasks or items, arranged in 4 different sectors e.g. – gross motor, fine motor, language and personal social. Very simple and limited numbers of tools are required to administer the test items (Fig. 1). Age scales are marked on top and bottom lines of the form. Each item is represented by a bar that spans ate age at which 25, 50, 75 and 90% of normal children (Standardised subjects) would pass that particular item. 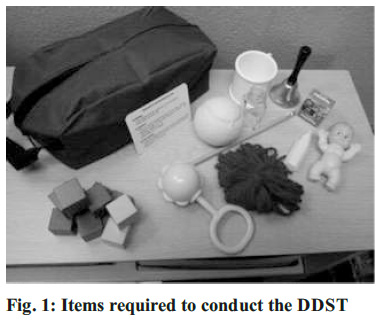 Procedure: A vertical line is drawn joining corresponding age ranges marked on the top and bottom lines. Only those items in boxes intersected by the line are administered to the child, at the most 12 to 15 items for a particular age (Fig. 2). The tests are given in graphic form, for ages at which 25%, 50%, 75% and 90% of children performed each item, hence enables to visualize at any age from birth to six years how a given child’s development compares with that of others.

Doubtful if: (a) Within one sector has 2 or more delays but normal in others sectors or, (b) At one or more sectors, gets one delay and in the same sector do not have pass in any of the box intersected by the line.

The test is considered normal if all those are not listed in either of above criteria.

Marked as ‘R’ if a particular item is recorded by history only and as no response (NR) when test not possible to administer or child not cooperating for any reason.

It was reliably used as a screening tool for developmental screening of children in Tehran city. 221 children ranging 0 to 6 years of age, in four Child Health Clinics with reliable results6. However, an abridged version of DDST called Trivandrum Developmental Screening Test (TDST) is used by few in busy office practice for convenience. 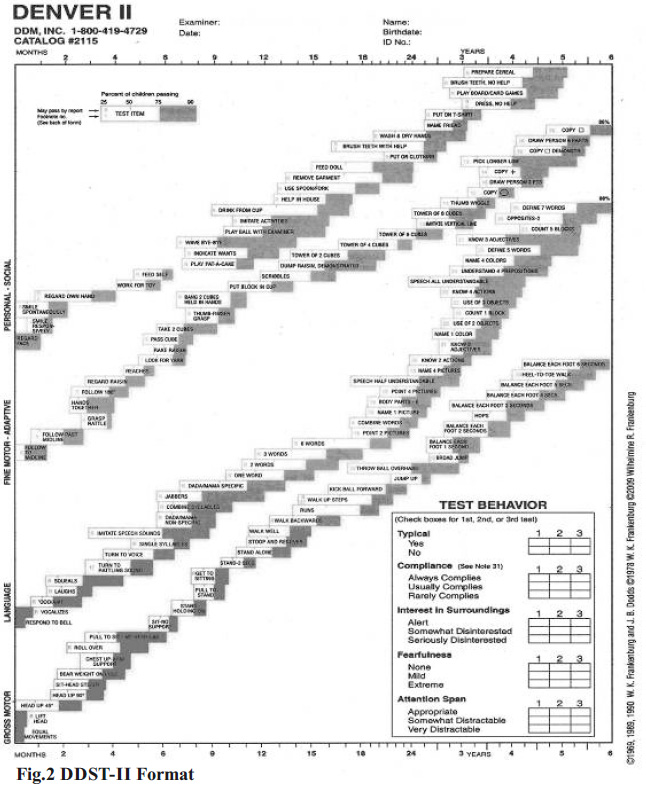 Aim and objectives:
1. To screen babies from 3 months to 2 years of age, attending well baby clinics for followup and routine immunisations, for developmental delay by DDST II.

Material and Method:
Inclusion criteria: Otherwise healthy, babies from 3 months to 2 years of age, attending wellbaby clinics of MGM Medical College Hospital for immunization and check-up.They were enrolled for study according to computer generated random numbers. Informed consent was obtained from their parents. They were followed-up once a month for three consecutive months.

Exclusion criteria: Babies who were already diagnosed as CP or had any form of dysmorphic features, congenital or chromosomal anomaly, those who were sick or failed to report for followup. Relevant pre-natal, perinatal and post-natal history was obtained, thorough clinical examination was performed and optimal investigations were undertaken to ascertain the aetiology in each case as far as possible. 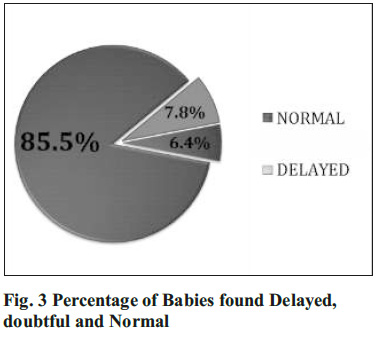 Result and discussion:141 babies are included in the study, who completed 3 months follow-up. 83 babies were males and 58 females. Their average birth weight was 2860 grams and average gestation 38.7 weeks. 9 (6.4%) babies were found to be having delayed development as per DDST-II. 11 (7.8%) had doubtful delay in development and 121 (85.8%) were normal (Fig. 3). Out of the 9 delayed, 3 were having spastic diplegia (Included a pair of twins) and one was hypotonic CP.

Of the delayed and doubtful, 25% gave history of preterm birth, 35% were low birth weight and 30% were born out of LSCS. 5% had delayed cry. Many over-laps were found. However, 35% had no history to suggest any perinatal insult (Fig. 4). 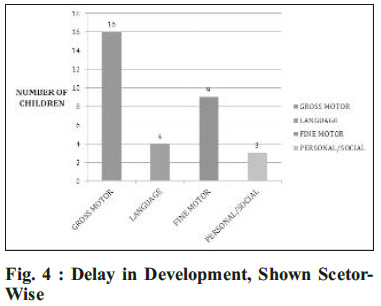 A significantly higher proportion of babies were found to be having developmental delay in the current study, not recognized in post-natal period until screening. The incidence was found to be almost 3 times more than expected, as compared to 1.4 to 2.4% reported from India4,5, may be because of under-reporting from rural areas due to lack of awareness and poor diagnostic facilities. Early detection and early intervention could be very beneficial and most desirable for such children4. In a larger study, 2111 children were screened from 0-5 years of age. Results were abnormal in 953 (45.1%) children. On multivariate analysis, delayed cry at birth, increasing age, presence of feeding problems, assisted delivery and birth injury were found to be associated with increasingly abnormal DDST II results6. In another study consisting of 35 children from birth to 6 years of age, 68.6% children presented with normal development. in remaining 31.4%, the number of items classified as “delay” or “attention” and “risk” or “untestable” suggest impairment in neuropsychomotor development7. The incidence has been reported as 2.5 per 1000 from the industrialised countries, obviously because of advanced antenatal and perinatal care; which of course have been over estimated as the only major reasons so far. Apart from the traditionally implicated delayed first cry by more than 5 minutes, breech, instrument delivery and birth defects various other factors like abnormal pregnancy interval and very long menstrual cycles have also been implicated. Nutritional and presumably hormonal milieu provided for conception and early gestation could be critical 8,9,10.

As regards the clinical types of Cerebral Palsy in India, a study of 1000 CP children have shown 61% as spastic quadriplegia, 22% spastic diplegia, with dyskinetic features among 8% and the rest having other miscellaneous types11.

Conclusion and Clinical Implications:
Such higher incidence of developmental delay, even after excluding cases those in higher risk or known cases of CP, is bound to alert our policy planners and those engaged in care of children for further detail neurological evaluation for confirmation and early intervention.

The finding should also insist routine use of Denver Developmental Screening Test12,13 in routine clinical practice, besides promoting awareness of developmental delays among parents and caregivers, both in urban and rural population. Multi-centric studies with larger sample size in various parts of our country are desirable to assess the exact scenario for urgent policy planning in this direction. High index of suspicion is the key for early detection.

What was known:
Incidence of developmental delay is higher in our country than the industrialized countries due to poor antenatal, perinatal care, particularly in the rural set-up, besides lack of awareness and advanced diagnostic facility.

What this study adds:
The incidence as high as 14.2%, was found during routine check-up, among other-wise normal babies, usually missed during early infancy.

5. Fox MA. Cerebral Palsy. An introduction to neuro-dev disorders of children. Natl Trust for Welfare of Persons with Autism, CP and Multiple Disabilities, 2000: 77.

13. Screening infants and young children for developmental disabilities. Am Acad of Pediatr Committee on Children with Disabilities. Pediatrics. 1994;93(5):863-5.