Profile and Outcome of Childhood Poisoning Along with Bites and Stings Attending a Rural Medical College, West Bengal, India

Introduction:
Poisoning in children is an important emergency both for the family and physician and is a worldwide problem. It is a common and preventable cause of morbidity and mortality in children. This situation is alarming in developing countries like India where neither people nor government has consented very actively for any prevention programme, especially for rural areas. Accidental poisoning is the twelfth leading cause of admission in the pediatric ward in India and accounts for about 1.0% of the hospitalized patients.1 Sometimes exposure to non-poisonous substance or suspected poisoning necessitates hospitalization and increased burden to the hospital2. Pattern of poisoning in a given area depends upon the availability of poisonous substance, occupation prevalent in the society, religious and cultural influences3. Therefore periodic review of current data on poisoning from various centers is essential for providing the ever changing information4. Scorpion sting and snake bite are also common causes of pediatric hospital admission in rural areas and continue to be important causes of morbidity and mortality. There are a few studies from India that describe the profile of poisoned paediatric patients from various regions. Most of them are now a decade old and none from this part of India5,6. We carried-out this study in the department of paediatrics of Murshidabad Medical College Hospital which is the only tertiary care centre in this region, catering services to this entire zone, including parts of Birbhum, Nadia and Malda districts with the aim of determining the profile and outcome of children presenting with acute poisoning and bites.

Material & Methods:
It was a retrospective record based cross sectional descriptive study. All children admitted to pediatric ward of Murshidabad Medical College Hospital with history of ingestion of poison or bite between November 2013 and December 2014 were identified from admission and discharge registers. Their medical records were obtained from medical record department and were analysed. Those cases who had no signs of life on presentation, or who had food poisoning, or had dog bite (Managed at OPD in our center) were excluded from the study. Collected data were compiled on Microsoft Excel worksheet (Microsoft, Redwoods, WA, USA) and was analysed by means of proportion. 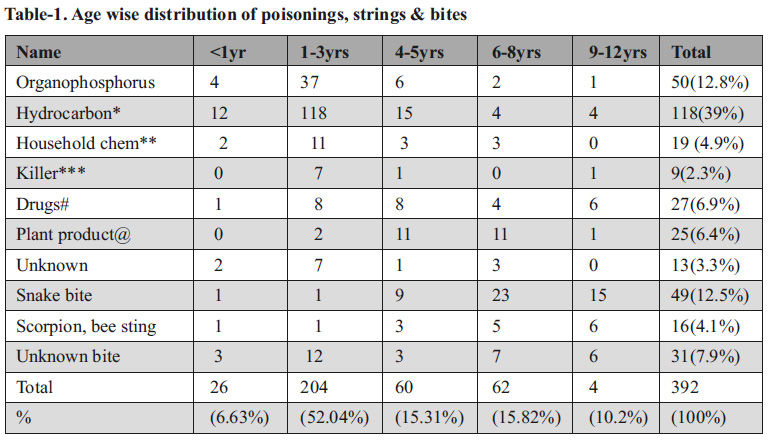 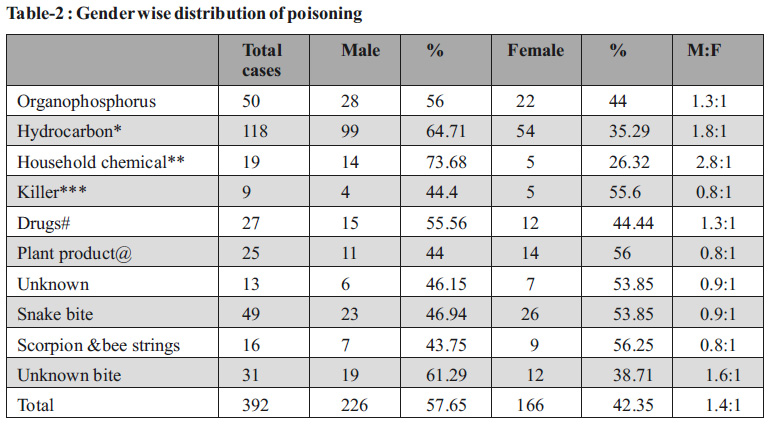 Almost all (99.23%) cases were accidental. The rest (0.77%) were suicidal, predominantly among adolescents. Homicidal intent could not be demonstrated in any patient.

Total cases admitted under study, 363 (92.6%) discharged from hospital, 20 (5.1%) had absconded while 7 cases (1.8%) had left the hospital against medical advice. Only 2 cases died due to snake bite (Figure1). Among the absconded, LAMA and expired taken together, the mean duration of hospital stay was 1.54±0.9 days.

The mean duration of hospital stay among those who died was 0.4±0.3day. 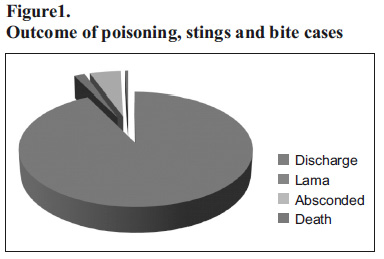 DISCUSSION:
Poisoning among children is one of the common medical emergencies encountered in pediatric practice. Poisoning has become more important probably because of reduction in infection related causes. Hospital statistics reported periodically from different parts of the country indicate that the proportion of poisoning varies from 0.33% to 7.64% of total admissions7,8. Our study revealed the proportion is 2.73% . It is very likely that this reporting is an underestimate of the actual magnitude of this problem as many cases go unreported4.The proportion from another two study of this state during 1977 to 1979 has been reported to be 1.98%.and 2.65%9.

Childhood poisoning is more common in males as shown in various studies from India and abroad and similar pattern was observed in our study5.6.8,10-16. Children between 1-3yr were most commonly involved in the present study, a pattern consistent with most of the other studies including Chatterjee B5 et all5,6,15,17,18, with a notable exception being Japan where infants are most commonly involved11.

This pattern of occurrence is related to the developmental stage of the child, who starts crawling and walking by one year of age, his/her activity increase and curiosity lead him/her to explore unfamiliar objects by putting them into his/her mouth. Male children predominate over the females as they display greater degree of activity 18. Hydrocarbon, organophosphorus and drugs, in decreasing order of frequency, were commonly implicated in our poisoned patients. Various studies from India and adjoining regions have also shown that hydrocarbon is the major culprit in majority of childhood poisonings4,5,12.Kerosene is mostly used in our country as a cooking fuel by low income families, and is frequently stored in empty soft drink bottles that are kept on the floor, within easy reach of the children. OP poisoning accounted for 12.76% of total cases in our study which is corroborative to other study5.Organophosphorus was responsible for childhood poisoning in only 2.4% and 4.0% Children at studies done in Australia and Columbia respectively19,20. Murshidabad is a predominantly agricultural district of West Bengal with easy availability of insecticides in most rural households. These are many a times stored in empty medicine bottles due to lack of child resistant packing predisposing young children to accidently consume them. In addition, older siblings participated in the care of the toddlers at the time of poisoning and the children were likely to be relatively of young age because of young ages of the mothers due to early marriage.

Toxicity due to drugs is also fairly common in our country 4 as well as certain developed countries 21,22, because of lack of availability of child proof containers and packing, and also on account of their being stored within easy reach of children. A broad group of agents including anti-psychotics, sedatives, iron syrup, oral contraceptive pills, antihypertensives, paracetamol, thyroxine & homeopathic medicines were implicated in our patients; anti- psychotics being the commonest.

Among the animal bite and stings, snakebite, unknown bite and stings cases were commonly implicated in decreasing order of frequency. As play is the integral part of the child’s life, most of the bite occurs during play or while doing household work. Due to low educational status and high family workload, children remain unobserved during playing and therefore more prone to such accidental bites. Exploratory nature of behavior in children with no sense of fear is also a contributory factor. Like other studies, vomiting was the common symptoms in our cases followed by respiratory distress, fever, salivation, altered sensorium. Near about 1/3rd cases were asymptomatic. Mean duration of hospital stay among survivors was1.54±0.9 days while it was only 0.4±0.3 days in expired cases. It shows that there was significantly less hospital stay in expired children. This might be due to valuable time wastage by local quack treatment and poor general condition at presentation of cases that expired.

Paediatric poisoning as noted in the present study is predominantly accidental in nature, though suicidal cases were also noted amongst adolescents. The reasons for the attempt at suicide were varied: Parental discord, failure in examinations, and fight with friends or sibling and un fulfillment of demand like purchase of mobile phone were the commonly cited reasons. This is in contrast to poisoning in adults where most of the cases have been noted to be suicidal.

Conclusion:
It can be concluded from the present study, that the trends for pediatric poisoning noted at our centre are not very different from those observed in hospital-based studies. Poisoning continues to be an important cause of morbidity and hospital admission in pediatric age group. In general, poisonings are more common in males; in the toddler age group (1-3 years) and the most common form of poisoning is hydrocarbon poisoning. Whereas snake bite is common in school going children. Simple measures like parental education, safe storage, and use of child proof packing and containers for drugs, could be effective in preventing a large proportion of morbidity and mortality related to childhood poisoning in absence of effective community based childhood poisoning prevention programme in our country23. The retrospective nature of the present study is a limitation. This may be responsible for nonavailability of data on some of the aspects. Nonetheless, since the affected children were drawn from the community, the findings of this study give an insight to actual situation on ground.

DIAGNOSIS AND MANAGEMENT OF CHRONIC CONSTIPATION

RECENT ADVANCES IN DIAGNOSIS OF MALARIA

HEMIPLEGIA: AN UNUSUAL PRESENTATION OF CEREBRAL MALARIA IN INFANCY