HEMIPLEGIA: AN UNUSUAL PRESENTATION OF CEREBRAL MALARIA IN INFANCY

INTRODUCTION :
Malaria is one of the most common diseases in the tropical countries. Cerebral malaria is usually a diffuse symmetric encephalopathy with focal signs being unusual. We report an unusual case of Cerebral Malaria where a seven month old boy presented with low grade fever, pallor, altered sensorium and right sided hemiplegia.

CASE REPORT:
A 7 month oldmale tribal child belonging from a low socio-economic class of Burdwan was admitted to our hospital with low grade fever for 10 days and sudden onset inability to move the right side of the body and altered sensorium for last 2 days. He was born out of non consanguineous marriage with normal birth history, normal development but not immunized. There was no associated history of measles, febrile seizures, allergy, anaphylaxis or contact with tuberculosis. On examination there was severe pallor, with hepatosplenomegaly. On neurological examination there was altered sensorium but no neck rigidity. Cranial nerves were normal. On motor examination, he had increased tone both in right upper and lower limb with power 3/5. Sensory system examination was unremarkable. Plantar reflex was extensor in the right side.There was no discharge from ears. Examination of eyes were normal. The child was provisionally diagnosed as disseminated tuberculosis.

But on repeated enquiry it was revealed that the child’s original residence was at Purulia, which is an endemic zone of Falciparum malaria. 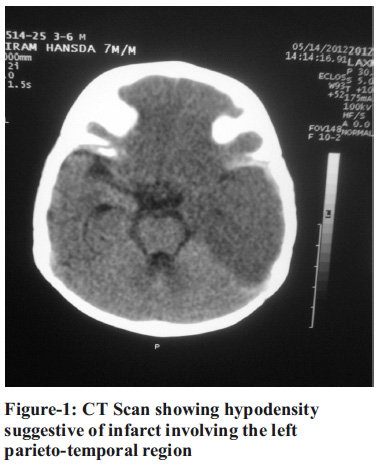 The child was treated with artesunate, clindamycin and ceftriaxone for 7 days. Blood transfusion was given to correct anemia. His sensorium and general condition improved on 5th day of admission. Child was advised physiotherapy. He was discharged after 12th day of hospitalization and were advised for regular follow up. During the subsequent follow up, there was improvement in power as well as gait. The child was also achieving the subsequent developmental milestones normally.

DISCUSSION:
Severe neurological complications are associated with complicated and severe Falciparum Malaria [1]. Cerebral malaria is defined as any CNS disturbances in a malarial infection.

The overall incidence of severe falciparum malaria is 0.1 % [2]. Despite adequate treatment 10.5 % of survivors developssequelae of Psychosis, Ataxia, Hemiplegia, Cortical Blindness, Aphasia and Extrapyramidal signs [3]. These sequelae are more common in children[4,5].

There are sporadic case reports on cerebral malariaassociated with focal neurological deficits as presentingsymptoms. Leopoldino et al reported a case of cerebralmalaria presented with left hemiparesis in 1999 [6]. However,the imaging studies revealed fi ndings consistent with an ischaemic stroke with persistent deficits after completeeradication.

In a large series from India including 185 adult patients, Bajiya and Kochar [2] observed neurological sequelae in 13 (10.5%) of the 123 survivors. These neurological sequelae were in the form of psychosis in 5 patients and cerebellar ataxia in 4 patients. Extrapyramidal rigidity and hemiplegia were also seen in 2 patients each.

Most of the cases reported earlier hemiplegia was present as asequelae of cerebral malaria. But in the index case the child presented with low grade fever and hemiplegia. Moreover, in our case there was low grade fever for many days before presentation. In endemic region intense malarial transmission continues round the year. So due to persistent antigenic stimulation majority of the children develop good immunity from malaria. This is known as premunition. These children can present with low grade fever of insidious onset and severe pallor [8].

The pathogenesis of Acute Stroke Syndrome is due to the obstruction of the Microcirculation due to Sludging of parasitized RBCs and direct malarial vasculopathy. Immuno pathological events include cyto-adherence, release of cytokines like: TNF-?, IL-2, IL-6, vascular leakage, oedema and tissue anoxia in the brain.

DIAGNOSIS AND MANAGEMENT OF CHRONIC CONSTIPATION

RECENT ADVANCES IN DIAGNOSIS OF MALARIA