Abstract:
Incontinentia pigmenti (IP) is an X linked dominant genodermatosis that affects skin, eyes, CNS, teeth and skeletal system. Skin manifestations are most common and occur in four quite distinctive phases. Here, we present a female neonate with vesiculobullous lesions in the limbs and trunk which healed with hyperpigmentation. Skin biopsy revealed eosinophilic spongiosis and suprabasal bullae, suggestive of incontinentia pigmenti.

Introduction:
The term Incontinentia pigmenti(IP) originates from the microscopic appearance of the lesion, which shows presence of loose pigment in the basal layer of epidermis, as if melanocytes are having incontinence of pigment1. The disease, also known as Block-Sulzberger syndrome, is a rare X linked dominant genodermatoses2.In the present report; we describe a case of IP in a female newborn, which was referred from a district hospital, because of vesiculobullous lesions in both upper and lower limbs and trunk since birth.

Case Report:
A 1 day old female presented with vesiculobullous lesions in the trunk and both upper and lower extremities since birth (fig1). Baby was born at term by caesarean section with birth weight of 3.2kg. Mother had no complication during antenatal period and her VDRL screen was negative. There was no similar history in the family, though mother had a miscarriage at 3 months of pregnancy earlier. Initially the baby was treated with antibiotic and antifungal (both systemic and topical) with no effect and the TORCH screening of the baby was negative.

Subsequently, on closer observation it was found that the vesiculobullous lesions were arranged along Blaschko’s line in fountain pattern in the trunk (fig2). During the course of stay in the hospital the lesions healed by hyperpigmentation to reappear as new vesicles at newer site. Skin biopsy revealed eosinophilic spongiosis, neutrophilia and suprabasal vacuoles, findings supportive of this genodermatosis(fig 3). Peripheral blood smear showed total leukocyte count of 12,600/cumm of which 19% were eosinophil. Fusidic acid cream was prescribed for short term treatment of the lesions. 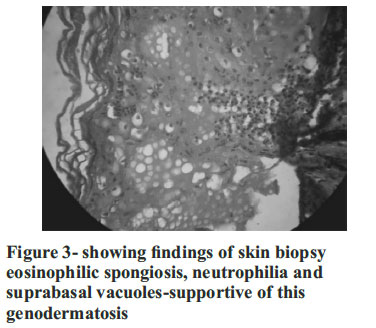 Ophthalmological, skeletal and neurological examination was normal till date. Currently, the baby is being followed up by the multidisciplinary team on an outpatient basis.

Discussion:
IP is a rare condition caused by mutation in NF kappa B essential modulator (NEMO) gene of kappa B genetic factor (nuclear kappa B essential modulator) located in q28 portion of X chromosome3. Eighty percent patients have a deletion of exon 4 and 10 of NEMO gene3. On the other hand, abnormalities in the short arm of chromosome Xp11 is also found. The exact cause of IP remains yet to be clarified4.

The syndrome involves ectodermal and mesodermal tissues. The manifestations, though in majority of cases involve skin, there may be extracutaneous manifestations also. The progression of skin manifestation occurs in four phases which may be concomitant or sequential. At first there is vesicular eruption which is followed by hyperkeratotic, verrucous linear plaque. In the third phase, there is greyish blue hyperpigmentation, distributed in Blaschko’s lines or in swirling pattern. In the fourth phase, there are hypopigmented linear macules with no skin appendages on the trunk or limb, appearing in adulthood5. According to some, there are only three phases as fourth phase may appear later and remains underdiagnosed6.

There are also reports of leukocytosis and eosinophilia in the first phase.

Neuroimaging and radiological examinations are not routinely done but may be helpful in some cases. FISH may reveal underlying genetic abnormality in male patients with IP and a normal karyotype3. Management is mainly supportive and based on symptomatology alone.

Though the skin manifestations regress spontaneously, the neurological, dental anomalies usually appear later in childhood, thus justifying continued follow up. In our case there were vesicular eruptions, followed by hyperkeratotic, verrucous linear plaques. The reason for reporting the case is the rarity of this disease and the diagnostic dilemma it may pose, because of its similarity in presentation with congenital syphilis, fungal infection or staphylococcal scalded skin syndrome.

Conclusion:
IP is a very rare genodermatosis, so it is difficult (important) to exclude other more common causes. But one should be aware of the typical manifestation to diagnose it early and help patient’s family to convey information regarding subsequent course of the disease and thus ensuring regular follow up at later age.

Sources of support: None Declaration on competing interests: None Funding: None