Introduction:
Acute Bronchiolitis is commonly caused by viral lower respiratory tract infection in infants. It is most common cause of hospitalization due to LRTI in infants and children. American Academy of Pediatrics Subcommittee on Diagnosis and Management of Bronchiolitis in 2014 guidelines defined bronchiolitis as acute inflammation, edema, and necrosis of epithelial cells lining of small airways, and increased mucus production 1. As par Oski’s Pediatrics principles and practice as first episode of wheezing in a child less than 24 months with physical findings of viral respiratory infection and no other explanation for wheezing like atopy etc 2.

Diagnosis:
Diagnosis is based essentially on clinical parameters of history and physical examination. It presents with upper respiratory features of rhinitis and cough and fever for 1 – 2 days. Followed by worsening of cough, tachypnea, respiratory distress and wheezing. Majority improve with mild course in 3 – 5 days but some may continue to worsen and may develop respiratory failure with irritability or drowsiness, decreased intake, cyanosis with decreased SaO2, grunt, marked retractions and hyper expanded chest. Apnea is more common in Preterm and children younger than 2 months. Course usually self limiting up to around 4 weeks. 6

Radiology:
Chest radiography do not correlates well with disease severity. Radiographic changes associated are atelectasis or hyperinflation. Shaw KN et al, in 1991 stated that evidence does not support routine chest radiography in children with bronchiolitis 7. Initial radiography should be reserved for cases in which respiratory effort is severe enough to warrant ICU admission or where signs of an airway complication (such as pneumothorax) are present.

Mansbach JM 9 in a large study reported in 2012 a positivity of 60% to 75% for RSV, and coinfections in up to one-third of infants. Value of identifying a specific viral etiology causing bronchiolitis in individual patient is doubtful except reducing frequency of antibiotic use.

Indication of testing for PCR in an infant hospitalized with bronchiolitis on monthly prophylaxis, if testing for RSV is positive suggesting breakthrough infection, monthly palivizumab prophylaxis should be discontinued because of the very low likelihood of a second RSV infection in the same year. PCR assay may detect prolonged viral shedding from an unrelated previous illness, particularly with rhinovirus. In RSV positive result almost always is indicate disease 7.

There are different scoring systems to predict severity of acute bronchiolitis in children has been used in different studies (Respiratory Distress Assessment Instrument — RDAI) but none proved to be universally acceptable and effective. One such scoring system was proposed by Tal et al, in 1983 and published in Pediatrics is shown here10. 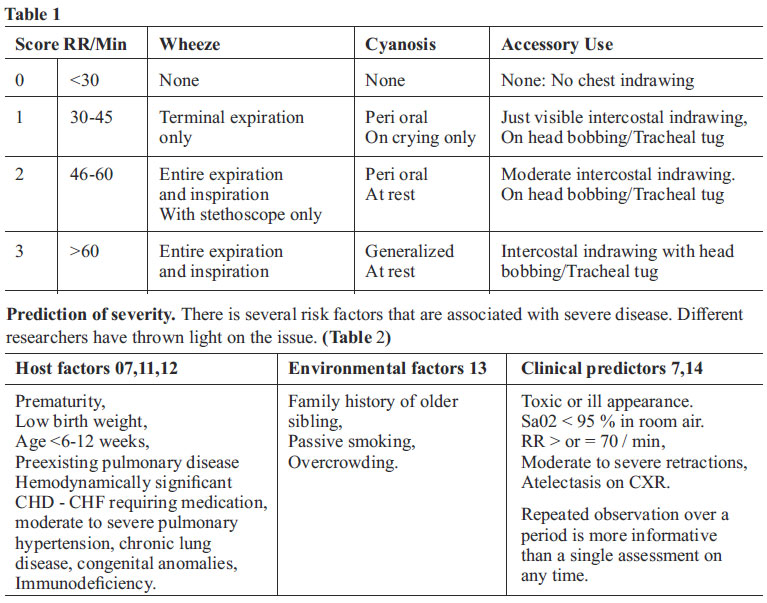 Clinical predictors :
include toxic or ill appearance. SaO2 < 95 % in room air. RR > or = 70 / min, moderate to severe retractions, atelectasis on CXR. Repeated observation over a period is more informative than a single assessment on any time.

Treatment:
Acute bronchiolitis is mainly a mild to moderate disease with chance progressive disease in some cases. Important steps of treatment lies in informing and teaching the parents about what to do in not so severe cases including fluid and electrolytes, oxygen, nutrition and simple airway management, and to identify signs of deterioration like chest indrawing, increasing tachypnea etc. and seek appropriate medical care in time. Best treatment options are still not clear and there exist a lot of controversies about best possible evidence based management in moderate to severe cases.

Nutrition and Hydration:
The essential part of treatment is nutrition, hydration and electrolyte balance. Oral feeding may be given frequently as the child can take. When respiratory rate is 60 to 70 breaths par minute and the child refuses to take orally, oral feed should be avoided and parenteral fluids should be given. A recent meta-analysis demonstrated that use of hypotonic fluids was associated with significant hyponatremia compared with isotonic fluids in older children.15 Isotonic fluids, like normal salinr or ringer lactate in general, should be used.

Oxygen:
Oxygen saturation is a poor predictor of respiratory distress but is a primary determinant for need for hospitalization in infants with bronchiolitis.16 Transient hypoxemia is common in healthy infants. 17

Supplemental oxygen is indicated if SaO2 falls persistently below 90% in previously healthy infants and may be discontinued when SaO2 is persistently at or above 90% and infant is feeding well and has minimal respiratory distress.

There are a number of new approaches to oxygen delivery in bronchiolitis, two of which are home oxygen and high frequency nasal cannula. There is emerging evidence for the role of home oxygen in reducing hospitalization stay or admission rate for infants with bronchiolitis, including 2 randomized trials. 18,19 Use of humidified, heated, high-flow nasal cannula to deliver air-oxygen mixtures provides assistance to infants with bronchiolitis through multiple mechanisms like improving respiratory effort, generation of continuous positive airway pressure reducing work of breathing and may decreasing need for intubation.20-22 The therapy has been studied in the emergency department, general inpatient setting, as well as the intensive care unit. One very large retrospective study from Australia, showed a decline in intubation rate in the subgroup of infants with bronchiolitis (n = 330) from 37% to 7% after the introduction of high-flow nasal cannula. 23

Continuous Positive Airway Pressure:
In severe bronchiolitis CPAP is used to prevent mechanical ventilation. CPAP helps by recruiting collapsed alveoli, and reducing airway pressure thus reducing air trapping. A systematic review in 2011 showed no conclusive evidence that CPAP reduces intubation in severe bronchiolitis.24 Another randomized trial in 2013 comparing NCPAP and oxygen inhalation concluded that NCPAP resulted in rapid improvement in 6 hours. This improvement was proportional to initial severity proving that early use of CPAP is more useful in severe cases.25 Current evidence is inconclusive on routine use of CPAP in severe cases of acute bronchiolitis.

Mechanical Ventilation:
Major indication of intubation and mechanical ventilation are clinical deterioration on conventional management or respiratory failure from beginning. In a prospective study 9 % of patients needed ventilation and median duration is about 5 days, though protracted course may occur. 11

Heliox:
Heliox (mixture of helium and oxygen) reduces airway resistance and respiratory distress as it flows more linearly. One meta analysis on effect of heliox in moderate to severe bronchiolitis showed improved respiratory distress scores in first hour but did not reduce need for intubation and mechanical ventilation or length of stay in pediatric intensive care unit. Current evidence on benefits of heliox in moderate to severe bronchiolitis is inadequate.26

Bronchodilators:
Most RCTs have failed to demonstrate a consistent benefit from ?- or ?-adrenergic agents. Several meta-analyses and systematic reviews have shown that bronchodilators may improve clinical symptom scores, but they do not affect disease resolution, need for hospitalization, or hospitalization duration. 27 In a recently updated Cochrane systematic review, Godamsky AM in 2014, assessed the impact of bronchodilators on oxygen saturation, the primary outcome measure, reported 30 randomized controlled trials involving 1992 infants in 12 countries. Some studies included in this review used drugs other than salbutamol but not epinephrine. Results of the Cochrane review indicated no benefit in the clinical course. 28

Epinephrine :
Epinephrine is an adrenergic agent with both ?- and ?-receptor agonist activities that has been used to treat upper and lower respiratory tract illnesses both as a systemic agent and as a nebulized solution. Most studies have compared Lepinephrine to placebo or albuterol.

A recent Cochrane meta-analysis by Hartling et al in 2011 found no evidence for utility in the inpatient setting.29 A large, multicenter randomized trial by Patel H et al in 2003 comparing nebulized epinephrine to placebo or albuterol in the hospital setting found no effect on hospitalization duration or other inpatient outcomes.30 A recent, large multicenter trial by Skierven HO et al in 2013 found even loner hospital stay when epinephrine was used on a fixed schedule compared with an asneeded schedule.31 This evidence suggests epinephrine should not be used in children hospitalized for bronchiolitis, except potentially as a rescue agent in severe disease 29.

A 2013 Cochrane review in 2008 by Zhang et al included 11 trials involving 1090 infants with mild to moderate disease. The evidence suggests that 3% saline is safe and effective at improving symptoms of mild to moderate bronchiolitis after 24 hours of use and reducing hospital Stay when average stay exceeds 3 days. 32

>Corticosteroids:
Systemic steroids: Corticosteroids is effective in respiratory diseases, such as asthma and croup. 33, 34 Initial studies suggested that steroid may favourably influence treatment of bronchiolitis. However a meta-analysis by Fernandes RM et al, in Cochrane Systemic Review in 2010 and again in most recent Cochrane systematic review in 2013 showed that corticosteroids systemic (IM, IV, Oral) or by inhalation method do not significantly reduce outpatient admissions when compared with placebo and do not reduce hospital stay.35,36

Another review by Wark PA et al, in 2005 containing 17 trials with 2596 participants and included 2 large ED-based randomized trials showed no reductions in hospital admissions with treatment with corticosteroids as compared with placebo.37 Another meta analysis of 3 studies by Davison C et al, in 2004 stated no role of systemic steroid in critically ill infants with bronchiolitis but may lead to prolonged virus shedding.38 Possibility of synergy between steroid and epinephrine was explored in ED setting to prevent hospitalization.

Antibiotics:
Infants with bronchiolitis frequently receive antibiotics because of fever, young age and concern for secondary infection. Early randomized controlled trials showed no benefit from routine antibacterial therapy for children with bronchiolitis and should be given when there is definite evidence of infection.40

Prevention:
Acute Bronchiolitis is a common infection without any effective therapy. So preventive measures are very useful.

General Measures:
Measures include amongst others tobacco smoke avoidance and promotion of breastfeeding. Tobacco Smoke- Tobacco smoke exposure increases the risk and severity of bronchiolitis. Strachan and Cook in 1997 in a meta-analysis including 40 studies reported of environmental tobacco smoke on rates of lower respiratory tract disease in infants. 41Breastfeeding -American Academy of Pediatrics in 2012 stated that respiratory infections were shown to be significantly less common in breastfed children.42 Meta-analysis from the Agency for Healthcare Research and Quality that showed that hospitalization risk secondary to respiratory diseases was reduced by 72% in infants who were exclusively breastfed for 4 or more months.

Monoclonal Antibodies These include Palivizumab (humanized mouse IgG1 directed against RSV) and its variants like Motavizumab and Numax – YTE, second and third generation monoclonal antibodies respectively.

Monthly palivizumab prophylaxis should be restricted to infants <29 weeks, except chronic lung disease of infancy and continue to require treatment may receive till 2 years. Data show that infants born at or after 29 weeks 0 days’ gestation have an respiratory syncytial virus (RSV) hospitalization rate similar to the rate of full-term infants.,43

Sources of support : None

Declaration on competing interests: None

22. Pham TM, O’Malley L, Mayfield S, Martin S, Schibler A. The effect of high flow nasal cannula therapy on the work of breathing in infants with bronchiolitis [published online ahead of print May 21, 2014]. Pediatr Pulmonol. doi:doi:10.1002/ppul.23060