Cephalhaematoma in a Newborn with Factor VIII Deficiency

Hemophilia A is a X-linked recessive hereditary clotting factor deficiency condition that lead to decreased factor VIII activity, occurs mainly in males. Decreased level of factor VIII activity leads to increased risk of bleeding. During newborn period, diagnosis is made after post-partum bleeding complication or unexpected bleeding after medical procedures. Severe cephalhaematoma at birth is a rare, nd can lead to high mortality in neonates. We present a neonate with unremarkable third degree consanguous marriage and uneventful pregnancy with a vaginal delivery with no instrumentation, presenting with severe cephalhaematoma bleeding at 4 hours of life. Aggressive support measures were implemented and bleeding managed. The unexpected bleeding lead to a coagulation study and the diagnosis of severe hemophilia A. There were no known sequelae. This case shows a rare hemophilia presentation reflecting the importance of coagulation studies when faced with unexplained severe bleeding.

Hemophilia is a x-linked recessive hereditary clotting factor deficiency which mainly affects male individuals1. It has an incidence of 1 per 5000 male births.2 Hemophilia A is the most common type accounting for 85% of the cases.2 It is suspected by an unexpected bleeding event with isolated prolonged activated partial thromboplastin time (APTT) on coagulation studies.3 The diagnosis is made by decreased plasmatic factor VIII or IX activity, after testing other coagulation factors (including von Willebrand factor)4.However, due to different clinical presentation comparing to older children, hemophilia in the newborn could be misdiagnosed, especially in the setting of negative family history4.

Despite being an hereditary condition it has a significant rate of de novo mutations, which could go from 30 to 50%.5,6 .When there is unknown family history, usually the diagnosis is made during the neonatal period is difficult.7 Its severity depends on the factor activity and correlates with clinical features, being severe hemophilia a significant risk for spontaneous bleeding,2 and cranial hemorrhage (3.5 to 4% of hemophilic patients).8. once a diagnosis of hemophilia is made, treatment for severe bleeding should be undertaken urgently with FVIII or FIX concentrates.

A significant hemostatic challenge like surgery, major trauma or labor, can represent a high bleeding risk.6,9,10 Neonatal hemophilia presentation is usually either related to a traumatic labor (intracranial hemorrhage and cephalohematoma) or to iatrogenic bleeding during heel stab sampling, venous puncture or vitamin K administration.3 this case is unique in term that there was delay in presentation family history ,and no traumatic or instrumental labour history and baby presented with cephalhaematoma. Hemophilic patients may remain undiagnosed during neonatal period.6 Better treatment strategies centered on recombinant factors replacement lead to a considerable decrease on mortality rates for hemophilia with recent studies showing a nearly normal life expectancy even in severe hemophilia.11,12

A male baby was born to G2P1L1 with healthy and third degree consanguinous parents. Routine obstetric workup was normal. The current gestation was uncomplicated, with a vaginal delivery at 39 weeks, with no complications. Baby cried immediately after birth. Birth weight of 3000 grams, height: 48.5 cm and head circumference: 34.5 cm (figure-1). No dimorphism detected and there were no traumatic lesions. He was transferred with his mother to post natal care for regular neonatal care. Vitamin K was administered at birth and breastfeeding was started. At 1 hours of life he developed a swelling over scalp which is rapidly progressive i/v/o this baby was transferred to our hospital.

At physical examination he presented with decrease activity, with low pitched crying, pallor, poor peripheral perfusion, heart rate of 165 bpp, respiratory rate of 45/min, normal blood pressure (81/47/59 mmHg), normal oxygen saturation, with no cardiopulmonary abnormality. He had marked irregular scalp edema over occipito-parietal area. There was a 5 cm (at 4 hrs of life) 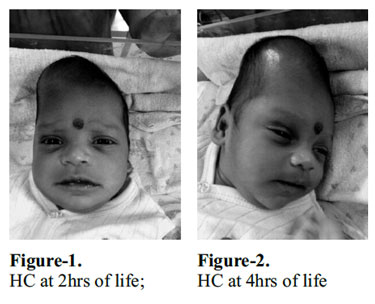 Increase in head circumference (39.5 cm). A full blood count, coagulation study, blood chemistry were performed. The blood count was consistent with anemia (hemoglobin: 8.6 g/dL) and coagulation studies revealed a prolonged unmeasaerable APTT and a pro-thrombin time not coagulable, interpreted as an inadequate sample which was repeated to show an isolated prolonged APTT.

Factor VIII, IX, XIII and vWF were measured, with a very low factor VIII activity (<1%) which was compatible with severe hemophilia. Blood chemistry was unremarkable at first with a steady increase in indirect bilirubin(maximum of 19.4 mg/Dl total bilirubin). Meantime he started NS (10 mL/kg), erythrocyte transfusion (15 mL/kg), intravenous vitamin K with adequate analgesia. After the diagnosis, recombinant factor VIII concentrate (50 IU/Kg) was started. He kept hemodynamic and cardiorespiratory stability. There was no further progression of the cephalhaematoma bleeding with slow decrease in head circumference. He was under phototherapy for jaundice during 60 hours. He was discharged on day 9 of life with a resolving cephalhaematoma, head circumference of 36.4 cm. He was referred hematology follow up clinics also Since discharge he had 1 minor bleeding episodes (Subcutaneous hematoma knee) requiring a single dose of factor VIII.Baby was registered with haemophilic society of India,unfortunetly he lost two follow up with us after 5 month of age.

Hemophilia has a worldwide distribution and occurs either in the form of familial disease or as a sporadic disease, due to de novo mutations. Well established recommendations are already in place for management of pregnancy and newborns with positive family history for hemophilia13. Sporadic cases of hemophilia can result in severe bleeding with lifelong morbidity if not promptly diagnosed and treated. Physiological alterations of the hemostatic system of newborns and at times nonspecific clinical presentation in the setting of a negative family history for haemophilia still represents a diagnostic challenge for neonatologists and hematologists for diagnosing sporadic cases of hemophilia14. Severe factor VIII deficiency mainly presents in neonatal period as excessive hematomas, post-delivery cephalhematomas, post-surgical bleeding and intracranial bleed15. Cephalohematomas are not uncommonly identified in normal infants at birth. Nonetheless, our case of this unusual appearance and without birth trauma bleeding, related to the known factor VIII deficiency, seems to be unique for two reasons. First, this was the first sign of the child’s coagulation pathologic abnormalities it was present at the time of birth and likely indicated in utero bleeding. Second it related solely to vaginal birth trauma in normal infants usually do not occur until several hours after birth16.

Our patient presented with anemia, lethargy and pre-shock, the most common presentation in hemophilic patients with cranial bleeding. He had a severe cephalhaematoma with an increase in 5 cm on head circumference and jaundice and required a saline bolus and packed red cells transfusion.17 According to Plauché et al., 1 cm increase on head size can relate to at least 40 mL bleeding.18,19 If we bare in mind that the total circulating blood of a neonate is around 80 mL/kg a 5 cm increase on head size represents at least a blood loss of 200 mL bleed (60% of total volume).20 According to literature, coagulation studies should be made as soon as possible under a suspicion of consumption coagulopathy.21 When present, disseminated intravascular coagulopathy seems to represent a sign of poor prognosis.22

Lack of recognition among health caregivers as when to investigate for a coagulation disorder in the newborn could contribute to delayed diagnosis and inappropriate treatment. Bearing in mind these facts, assays for FVIII and FIX should be a part of evaluation of newborn with bleeding, especially in those with intracranial hemorrhage.

11. Darby SC, Kan SW, Spooner RJ, et al. Mortality, life expectancy and causes of death in people with haemophilia A and B in the United Kingdom who were not infected with HIV. Blood 2007;110:815-25.

Hunger To Haunt Us How Long?

Cord Serum Albumin As A Tool to Predict Neonatal Hyperbilirubinemia

Development And Validation Of Trivandrum Development Screening Chart For Children…

Clinical Markers of Tuberculosis in Children

Pleural effusion in hepatitis A infection