ABSTRACT :
Ichthyosis is a very heterogeneous family of skin disorders with harlequin ichthyosis being the most severe genetic form. It is a rare autosomal recessive condition, characterized by dry, severely thickened skin with large plates of hyperkeratotic scale, separated by deep fissures. Infants are very susceptible to metabolic abnormalities and infections. They usually do not survive for very long, but several long term survivals have been noted. The vast majority of affected individuals are homozygous for mutations in the ABCA12 gene, which cause a deficiency of the epidermal lipid transporter, resulting in hyperkeratosis and abnormal barrier function. We report a case of a newborn with harlequin ichthyosis, born to unrelated parents, who had a favorable evolution but later on died unfortunately.

Introduction:
Ichthyosis is a heterogeneous family of skin disorders, of which harlequin ichthyosis being the most severe genetic form. At time of birth, the skin is thick and very hard , form a dense “armor”-like scale that covers almost all parts of the body. The skin forms large triangular or diamond-shaped plates which separated by deep fissures. The skin barrier which protective is compromised and the infant becomes very susceptible to infections. These abnormalities also affect the shape of the eyelids, nose, mouth, and ears. A movement of the arms and legs is restricted. Breathing difficulties and respiratory failure may occur, which probably secondary to pulmonary surfactant deficiency, caused by mutations in the ABCA12 gene.

To find out the pathomechanism of harlequin ichthyosis and the function of the ABCA12 protein studies are performed which revealed that lung alveolar collapse may occur soon after birth. Reduction in the level of surfactant protein B, an essential component of alveolar surfactant, was noticed 1.

Low birth weight neonates usually affected, but in our case baby was full term. In neonatal period this condition is often lethal, but with high intensive care and the use of medication, lifespan has been prolonged. This condition is inherited is an autosomal recessive pattern. The vast majority of individuals with harlequin ichthyosis have been found to be homozygous for mutations in the ABCA12 gene (adenosine triphosphate [ATP]- binding cassette transporter, subfamily A, member 12) that was mapped to chromosome 2q33-q35. The normal gene has 53 exons and encodes a protein that belongs to a subfamily of ATP-binding cassette transporters and this gene has a genetic information for transmembrane protein which are essential to transfer of lipids from cytosol of the corneocyte into lamellar granules. More than 30 different mutations of the this gene have been identified in individuals with harlequin ichthyosis. Most of them are nonsense mutations and small insertions/deletions that result in premature termination of protein translation. Epidermal lipid transporter prevent the formation of lipid bilayers in the stratum corneum and consequences of mutation result in hyperkeratosis and abnormal barrier function2. Harlequin type congenital ichthyosis subdivided into 3 subtypes. In types 1 and 2, profilaggrin is expressed but not processed to filaggrin, whereas type 3 lacks profilaggrin. Profilaggrin is protein of keratohyalin granules in the epidermis. During terminal differentiation, it will be cleaved into multiple filaggrin peptides that aggregate keratin filament .Profilaggrin accumulates in keratohyalin granules and undergoes dephosphorylation and proteolysis to filaggrin3,4. A defect of conversion of profilaggrin to filaggrin was suggested as a possible pathogenetic mechanism as protein phosphatase is thought to be involved both in the conversion of profilaggrin to filaggrin and in the synthesis of the lipid content of lamellar granules5.

Case Reprt: A 40 week term (AGA) male baby was born by normal vaginal delivery with characteristic appearance that immediately prompted a diagnosis of harlequin ichthyosis. This was the first baby born to the G2P1A1(at three month spontaneous abortion) mother, non consanguineous marriage. Antenatal check-ups and USG did not show any abnormality.The Apgar score was 7. The birth parameters were: weight 2630 g, length 49 cm, head circumference 35 cm, and thoracic circumference 33 cm. Physical examination revealed that the skin was hard, thickened with yellowish and leathery white regions with large plates of hyperkeratotic scale, split irregularly by deep erythematous fissures. The infant also had ectropion, nasal hypoplasia, rudimentry ears and fixed, open mouth (Fig. 1). Fingers and toes were hyperplastic. The limbs were in a semiflexed position, with flexion contractures at elbows and knees and limited mobility (Fig. 2). External genitalia were male. 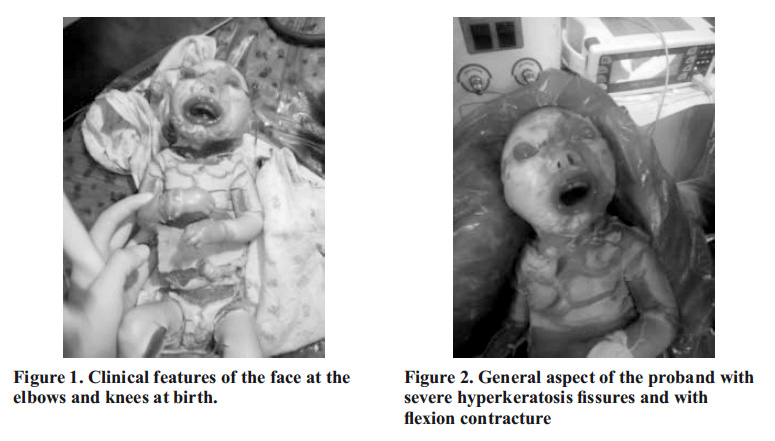 She was unable to suck due to abnormalities of the mouth. The newborn was placed in a humidified incubator and a sterile environment was maintained to avoid infections . Parenteral route for nutrition was used. Ultrasonography of the abdomen did not reveal any abnormality. Local antiseptics were applied.other Treatment was sterile olive oil and emollient creams to soften the skin. Eye pads soaked in saline solution done to covered Ectropion and ophthalmic ointments were also used. Oral retinoid therapy was not used, because of the lack of experience with these drugs and also due to the favorable evolution with the topical treatment during the course of hospitalization. Regular physical examination was recommended, but further data were not available, as baby could not able to revive.

Discussion:
Harlequin fetus is a rare hereditary disorder with an incidence of 1 in 300 000 births. The first report was made by Reverend Oliver Hart, of Charleston, South Carolina, who described some features of the disorder in 17506 . Until now, at least 100 cases were reported with this condition. The disorder was reported in both sexes and in different ethnic groups. The inheritance is autosomal recessive, supported by consanguinity in some families with affected offspring. However there was no consanguinity in our case. For a long period of time, the pathomechanisms and the underlying genetic defects of the disease were not known. ABCA12 mutations were then reported as the main cause of the disease2,7. Affected individuals who affected usually homozygous for the mutation with the autosomal recessive inheritance. ABCA12 belongs to a large superfamily of ABC transporters, which bind adenosine triphosphate while aiding the transport of different molecules across the cell membrane. This ABCA12 gene has 53 exons and encodes a protein which responsible for the transport of epidermal lipids. Most ABCA12 mutations lead to severe truncations and seriously affect ABCA12 peptide function8 .Affected infants usually do not survive for very long because of undernourishment caused by the rigidity of the lips, underventilation and infections, but longer survival was also reported. Experimental studies using model mice reproduced the human skin phenotype and provided further evidence that ABCA12 plays an essential role in lung and skin barrier functions1. Management of congenital ichthyosis uses topical antiseptics, oral vitamin A, liquid paraffin, 5% lactic acid lotions9. Oral retinoid therapy is recommended for cases with severe skin involvement. Adverse effects, like dearrangment of liver function, growth retardation must be taken into consideration and discussed with the parents. Prevention of secondary complications is also important. Creams or ointments are used to keep the skin soft and hydrated, keratolytic agents will promote peeling and thinning of the stratum corneum. Several measures, such as the prevention of infection and of dehydration, together with maintenance of body temperature are appropriate. Lubrication of the cornea in cases with ectropion prevents corneal drying. Weight gain and fluid intake must be carefully monitored. A multidisciplinary approach is vital in the management of the disease as it could prolong survival beyond the neonatal period. Prognosis depends on possible complications. The survival rate of baby born with this condition has improved over the years, but still the most common cause of death remains fulminant sepsis.

Conclusion:
Our patient had the typical phenotypic features of a harlequin fetus. Harlequin ichthyosis is the most severe form of congenital ichthyosis. This condition is inherited in an autosomal recessive pattern. The vast majority of affected individuals have been found to be homozygous for mutations in the ABCA12 gene that was mapped to chromosome 2q33-q35. Infants usually do not survive for long, in our case baby initially show a favorable evolution with intensive care, topical tr eatmen t an d p r ev en tio n o f s eco n d ar y complications but later on unfortunately. Management of patients with harlequin ichthyosis requires a well coordinated multi-disciplinary approach.

General Practice and Family Medicine as a speciality: Key to health care in india

Role of Vitamin D in Health and Diseases in Children